Popular news
You are at:Home»Events»On The Road»Marconi Sprint 15s 2020 – At Home and Away

There is a risk that we will remember the year 2020 for all the things we were not able to do. And that is understandable given we have all been deeply concerned for the wellbeing of our friends and loved ones alongside trying to adjust to the various and shifting implications of lockdown.

It is also true that there have been periods of 2020 when we were unable to sail due to lockdown requirements. But for the Sprint 15 fleet at Marconi, none of the above has prevented us from having a cracking season of sailing this year.

As a boat that can be sailed single handed and is simple to rig, launch and recover – the Sprint 15 has many distinct qualities that lent itself as a lockdown vessel of choice. Couple that with a fleet of active sailors willing to find safe ways to get afloat – and you end up with a great season of sailing. And I say this not to be smug or complacent – merely to recognise and appreciate how much top-notch sailing 2020 was able to bring, despite the odds.

The Marconi Sprint 15 fleet also participated in a number of events further afield – including Winter TTs at Draycote and Oxford plus the Sport Nationals at North Devon Yacht Club and the National Championships at Grafham.

The Sprint 15s sail through the winter with monthly events at different host clubs. In January, Nigel and Jenny attended the event at Draycote which was extremely gusty and resulted in all but three competitors retiring in Race 1. The other three completed the racing and Nigel took a well deserved third place. The February event was due to be at Grafham but had to be cancelled due to very high winds – something which marked much of January to March. On Saturday 14th March, Nigel and Jenny again represented Marconi, this time at Oxford with Jenny coming second. We didn’t know it then, but we were just over a week away from lockdown. The final rescheduled Grafham TT for 22nd March had to be cancelled as a result.

Closer to home, our Marconi summer season would have started the weekend before lockdown but unfortunately was not able to do so. In late May, it was permissible to drive to a place where you would undertake exercise. This opened up the opportunity to go sailing – although organized club activities and support boat cover were not yet available.

Saturday 25th May saw my first post lockdown sail on a Sprint 15 with a few other fleet members and I believe that was the first day that any of the Sprint 15s took to the water. Whilst very grateful to be afloat again, we all appreciated the safety considerations of sailing without safety boats and where any call to the emergency services could put their staff or volunteers at even greater risk than normal. On the plus side, working from home meant that some people were able to get to the club for a weekday evening sail that the daily commute would normally have prevented. So there was an opportunity for additional sailing too. 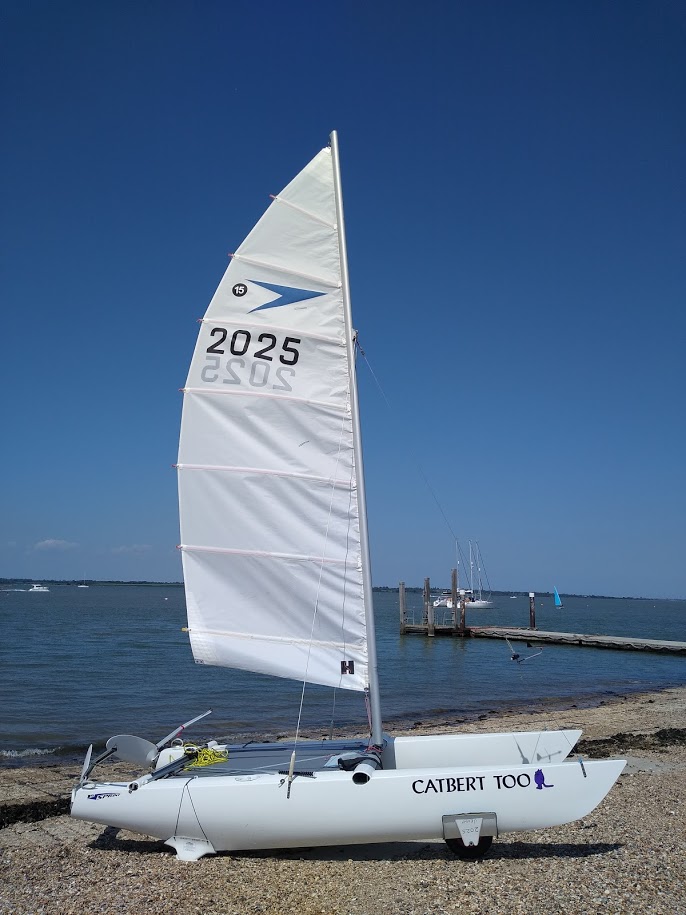 So Fleet Commodore Nigel set up a WhatsApp group so we could always arrange to sail in company. Guidance documents were circulated reminding people to check all their rigging and kit to ensure it was seaworthy. And to carry a tow rope, spare parts and tools and a VHF and/or phone to call for help if required. We also planned to sail towards the top of the tide which made it easier and safer to launch and recover.

During June and early July, we took the opportunity to do a lot of cruising sailing. The River Blackwater lends itself very well to cruising and because we were not racing, this created the time for some fleet members to discover the joys of sailing to different parts of the river for the first time. By my count, during that time we did five figure or eight trips around Osea and Northey Island, three sails around Osea, two figure of eights around Radio Caroline and Osea and a few more local trips. 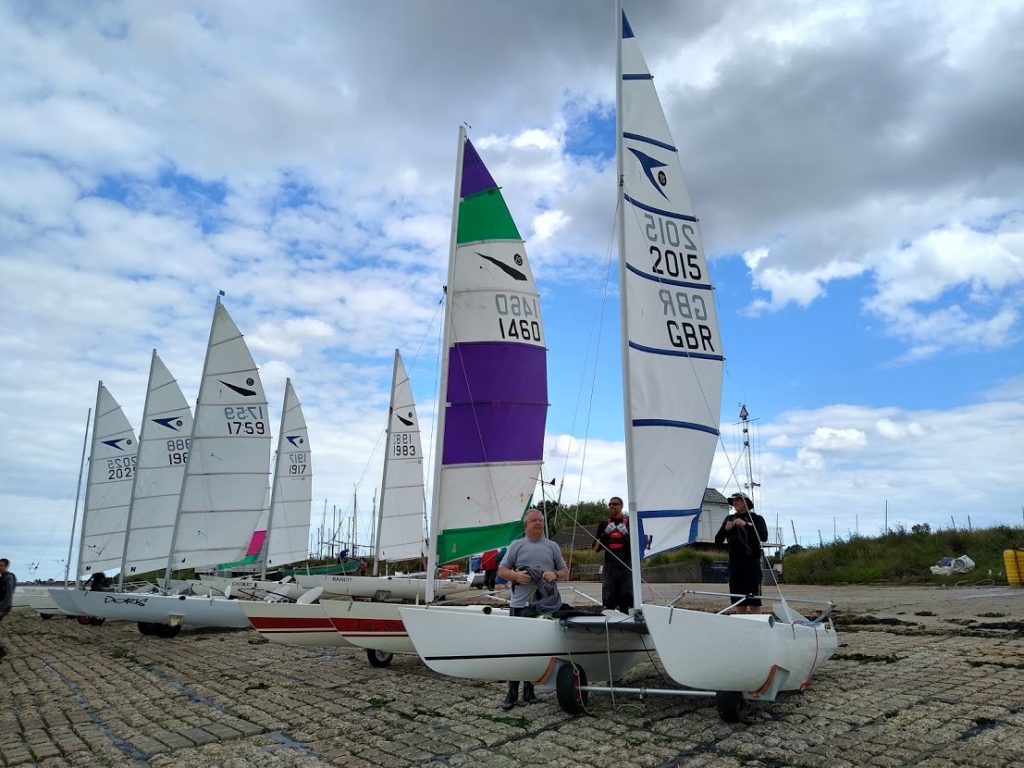 We were also delighted to welcome a number of new members to the fleet. James T, Lee G, Rob B, Ian B, Salvatore and Karen joined during the season and Steve C has joined right at the end. We also welcomed some associate members – Dan B who borrowed his Dad’s boat for some sailing in the summer, Jemma who borrowed a Sprint 15 for our Nationals at Grafham and Dan S who was going to use the club Sprint 15 for the Stone Winter Series.

In view of the number of new fleet members, we held a socially distanced shore based training session on Sunday 5th July. Three small groups of fleet members were set up around separate boats in the cat field whilst some of the more experienced sailors talked through the key points of sailing a Sprint 15 and the lessons that most of us have learned the hard way. Ordinarily, we would have then gone onto the water to put those lessons into practice but, unfortunately, the strong winds prevented it. 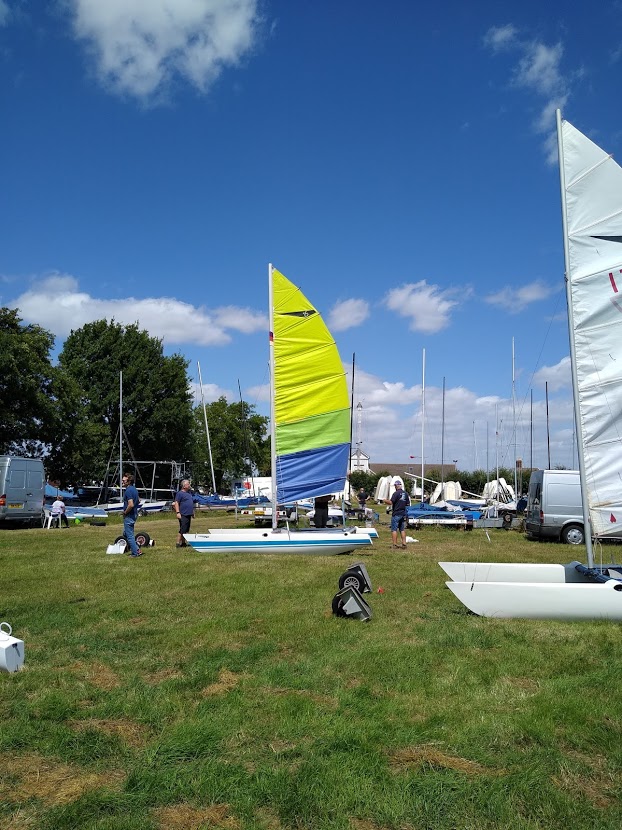 Following a lot of effort from various club volunteers – arrangements were put in place so that Sunday racing could resume on 19th July. This took the form of Sunday Pursuit Races which enabled staggered launching to support social distancing. Careful arrangements were also put in place to enable Support Boats to be safely manned. The Socially Distanced Summer Series of Pursuit Races ran from 19th July through to 23rd August. They enabled a very welcome return to racing for some – whilst providing support boat cover for those who just wanted to go for a general sail.

In late July, the club was able to host its annual Camping Fortnight. Unfortunately, Cadet Week could not take place but the Cadet Regatta on Saturday 1st August still went ahead. Three Sprint 15s took part with young Cadets crewing as the conditions were breezy. John and David Ball took the win from Harry and Andrew Dowley and Amelie and Ian Black. 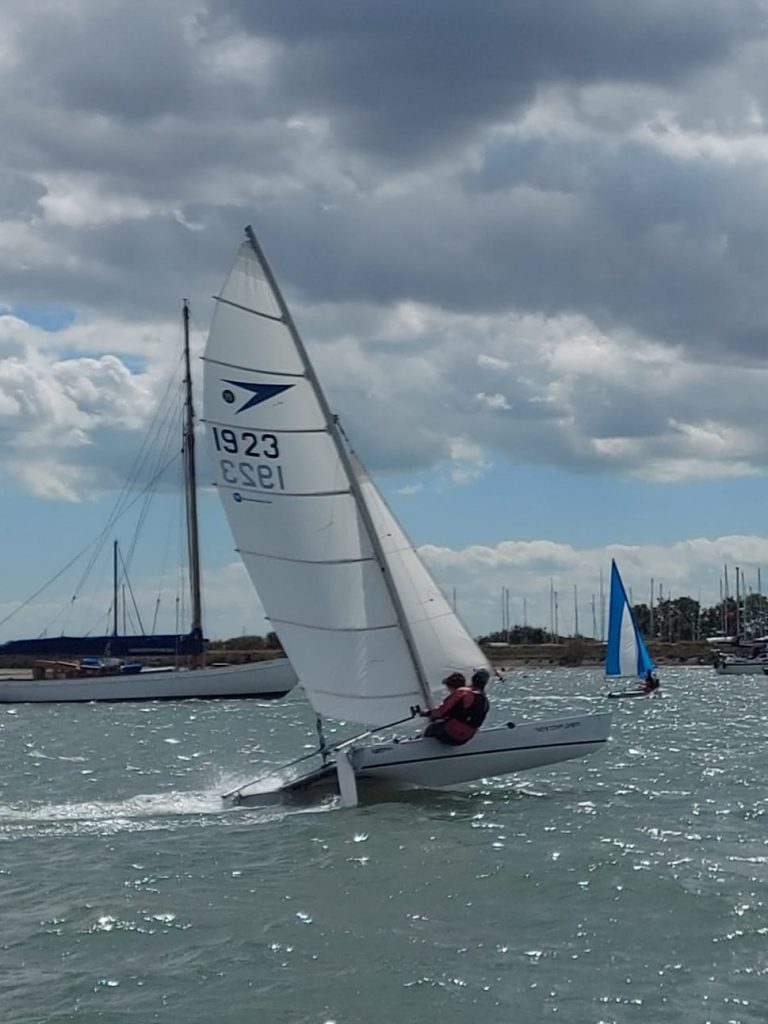 Camping Fortnight also provided an opportunity for several local cruises and three longer distance trips to Pyefleet Creek, to Wivenhoe and to Salcott and Tollesbury. For some, these were visits for the first time. For others, they were a welcome return to old haunts. These trips in turn whetted the appetite for cruises further afield during the rest of August – to Burnham and to Colchester – which are also the subject of separate write-ups.

After the glorious weather of the Camping Fortnight, the August Bank Holiday came as a bit of a shock weather wise with lots of rain, no wind on the Friday, excessive winds on the Saturday and Sunday and light winds on the Monday. As a result, racing was cancelled on Sunday but a few Sprint 15s went out in the afternoon when the winds had eased off slightly and got some Sport mode practice in. The Bank Holiday Monday race did manage to go ahead as planned.

Back to Race Box Starts

Heading into September, the club switched from Pursuit racing to Race box starts with two back to back races for the Autumn Series. It was great to see the bigger cats (and also skiff monohulls) able to join in the racing as they are less suited to beach starts than smaller boats with short foils. It was also great to see a large turnout of Sprint 15s in the Autumn Series – fourteen different competitors took part across the series from the start of September to mid-October. 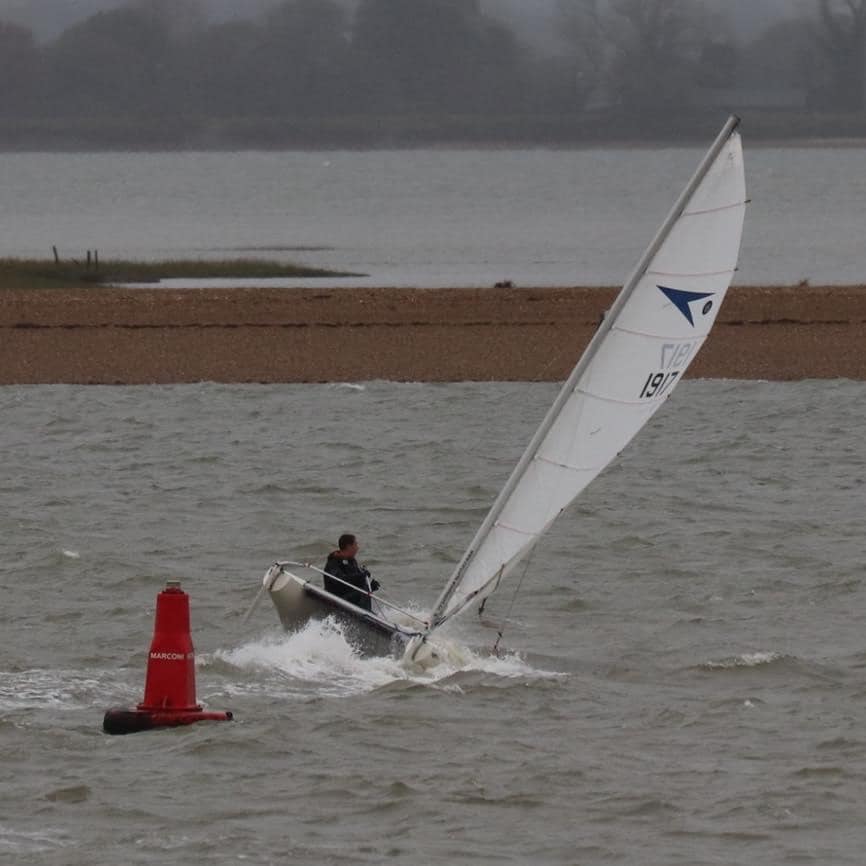 Sport Nationals – On the Road to Devon

The Sprint 15 fleet is unusual and perhaps unique in holding two National Championships each year. One Championships are for Una Rig and Two Up formats whilst the Sport Nationals are for one up, two sails and trapeze format – not a mode we traditionally sail at Marconi. This year, the Sport Nationals took place at North Devon Yacht Club in Instow and four Marconi sailors – Jenny, David, Nigel and Jon headed down to take part – accompanied by chief pit crew, Dave R. North Devon Yacht Club had put outstanding arrangements in place to keep everyone safe – particularly as Instow was even more busy than usual with holiday makers and locals alike enjoying the beach. The first day of racing had to be cancelled due to strong winds but we made the most of that time by exploring the picturesque local area. We were, however, able to get six great races in over the next two days with a brilliant turn out of forty-two boats. Whilst shore based activities of course had to be different to normal – the on the water action and racing was as fantastic as always. 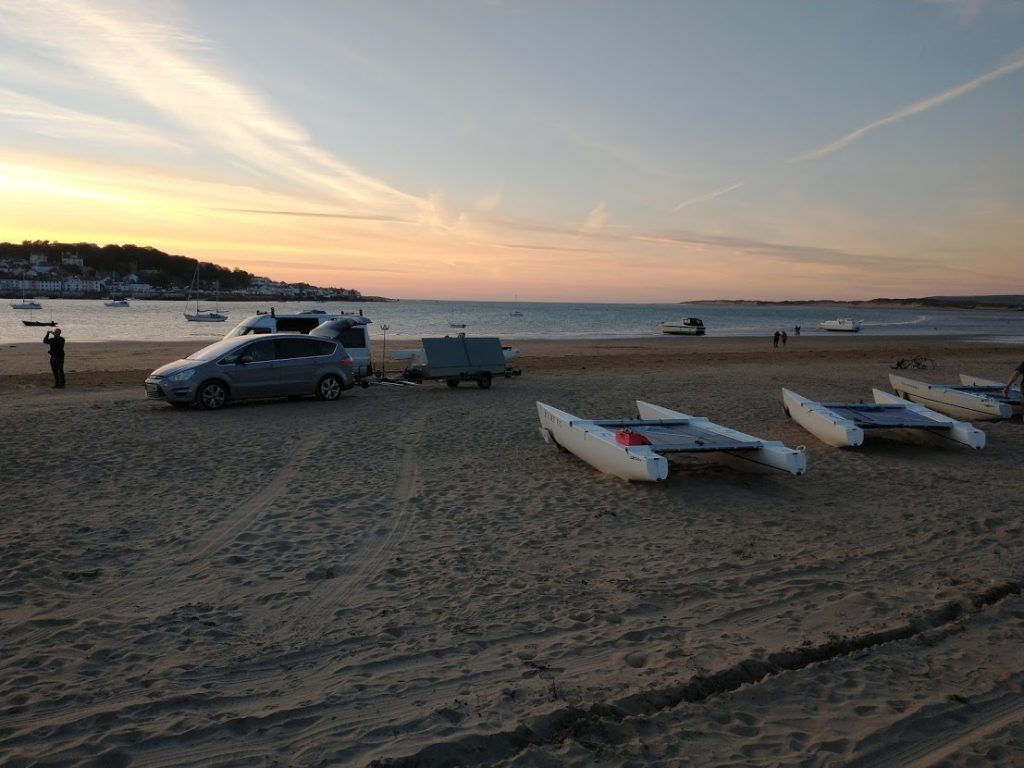 Mid-October saw the Grafham Cat Open. This is historically the last Summer event in the Sprint 15 calendar and also our Inland Championships. In recent years, Marconi have been well represented at this event. This year, Grafham Water Sailing Club kindly agreed to host our National Championships at this event. This was previously due to take place in August at Whitstable but like so many other sailing events, it could not take place at the time. Undeterred, forty-eight Sprint 15s descended on Grafham for the re-scheduled Nationals which included a fleet of eleven boats from Marconi. It felt “touch and go” as to whether the event could take place and in the week beforehand, various parts of the country were moved into different lockdown tiers, including Essex. However, the event was able to take place and despite the best efforts of the weather (this time, no wind, ironically) – we were able to get four races in and complete our second National Championships of the year. Marconi’s medal haul included 10th place: David B – Most Improved: Pete Rich – Heavyweight: Jon P and Most Persistent: Lee G.

We returned to Marconi for the Last Fling – the traditional final race of the season. Sprint 15 sails used to be very colourful affairs and very photogenic but in recent decades, mainsails have been predominantly white. So it was decided that for the Last Fling, we would dig out the old sails and end the summer season in a blaze of colour. And very fine they all looked too. 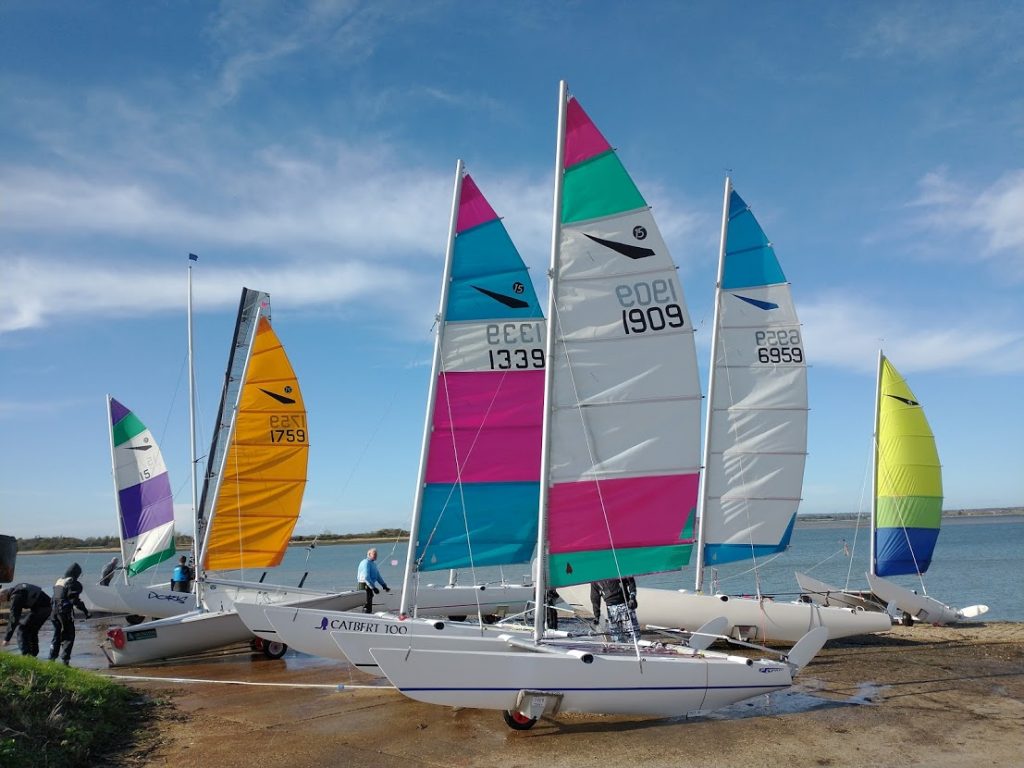 The Last Fling brings the Marconi summer racing season to a close but nine Sprint 15 sailors were all set to complete the winter series with our neighbours at Stone SC. Unfortunately, the most recent lockdown has meant that this series cannot take place.

Despite this, the Sprint 15 fleet have plenty of really positive sailing experiences to look back on in 2020. By my count – Catbert Too and I have been on the water on 52 days since we were able to sail again in late May. Many of my Sprint 15 colleagues have notched up impressive numbers too. It is rumoured that Fleet Commodore Nigel has completed 850 miles on his Sprint 15 since May and would dearly love to get that to 1000 before the year is out. You never know, December might just bring us that opportunity – even if we have to buy him some nav lights for Christmas. But even if it doesn’t, from a Marconi Sprint 15 sailing perspective, its been a good year.

Thank you to Jenny Ball for providing this write up.