Popular news
You are at:Home»Fleets»Keelboat»Marconi Make their Mark in British Keelboat League Final

The event lasted three days, with 12 teams taking part. All competitors had either finished in the top two at a qualifier event or had been selected as a wildcard, we got our place by winning the preceding event in Cardiff.

Friday started with very light wind, leading to a one hour postponement and then a few races being sailed in very light conditions before a nice 8-10 knot sea breeze filled in. The racing was very tactical, involving looking for areas of wind and choosing the correct side of the course on each leg. The shifty nature of the wind meant that the first couple of races were quite luck-dependent, and keeping our heads out of the boat was key. We started off really well, and with probably more than our fair share of luck secured two race wins, before swapping out for our first break. Over the break the wind started to pick up with a sea breeze and became more stable, getting to a point where we were just starting to depower. We were able to play the shifts more, not just hunting for breeze to keep the boat moving. As everyone warmed up and the racing became less dependent on wind and luck, our confidence grew. We maintained a series of good results, finishing the first day with a fine margin at the top of the leaderboard. 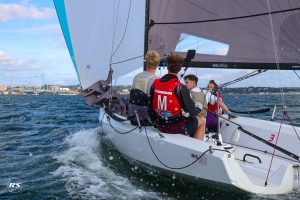 The forecast was for light wind and light wind is what we got, 0-4kts of wind. This meant wind-watching was key, but also boat handling in the light stuff, something we struggled with. In one particular race (later abandoned due to timeout) some teams found themselves dropping their kite on the ‘downwind’ leg to try to fight the tide (around 0.5 knots at the time). Thankfully we didn’t have to compete in that race, but this sort of racing led to a frustrating second day and our results suffered. A string of 4th-6th place finishes left us well outside the top three. The wind started to fill in a little toward the end of the day and we improved slightly, but were unable to find the form we had on Day 1 in similar conditions. We regrouped overnight, reminded ourselves of why we were there and what our original expectations were. 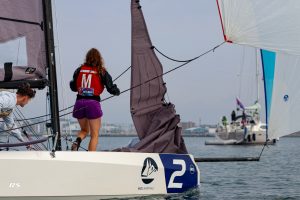 A sea breeze has filled in, just have to use it!

We came back with more energy as a team, highlighted by Dan rediscovering his singing voice – to the dismay of our team and others. Despite the promising forecast the morning was again very light. We arrived at the club to thick fog and no wind; after confirmation that racing would go ahead the six boats launched, and were then held at the harbour entrance until the fog cleared. It lifted within the hour and we made our way slowly to the sailing area. We kept our heads out of the boat and our spirits high, but in the light wind we found it hard to start well. Although we were able to claw back some places during most of the races, this led to some average results, cementing our overall place mid-fleet.

The wind that we were hoping for earlier came around midday and we found ourselves fighting for space on the start line rather than fighting to get to it on time… the racing we had enjoyed so much in the afternoon of Day 1 was back on! We managed to get some strong races to finish the weekend, and with less pressure on ourselves we were also enjoying the sailing more. Hiking was back on, but without the luxury of trapeze harnesses or security of toe straps that we are all used to now. In the penultimate race one of the lines holding the guard rails broke, sending me over the side. Thankfully a grip on the jib sheet and a grab from the other team members were able to stop me disappearing in the wake. A lot of muscle from Jack, Hannah and Dan plucked me out of the water before we lost too much ground. Unsurprisingly we didn’t do too well in this race, but we were very happy to end with results on a definite upward trend in more energetic sailing conditions. 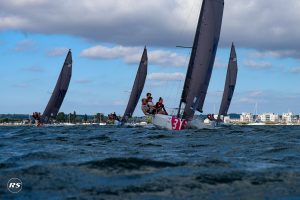 Marconi lead on the second lap in windy conditions

We ended the weekend tired and were very pleased to finish in 5th place out of the 12 teams that had qualified (Royal Thames Yacht Club were the clear overall winners). The teams at the top of the leaderboard showed impressive consistency across the weekend, building a big buffer in the light airs and still getting good results when the wind picked up. Full results can be found here: http://events.ksail.co.uk/2021/BKLFinal/DisplayResultsSummary.html

Poole Yacht Club and the British Keelboat league ran a great event and we were very fortunate to be a part of it. Thank you very much to all those at MSC who have worked to make the keelboat sailing such a success at the club.