Popular news
You are at:Home»Events»‘Sealing the Deal’, after a ‘Warm summer’s eve’.

The 4th and 5th of September was the weekend of the Cardiff Bay Yacht Club British Keelboat League regatta. The event promised close, competitive racing at a very fast pace and potential qualification for the National Finals in Poole. The team that Marconi had put together consisted of (from stern to bow) Daniel Nickalls, Jack Wardell, David Nickalls, and Hannah Bard.

On the Friday before the event the host club offered visiting teams a chance to familiarise themselves with the boats – a fleet of six identical RS21s. Given that we hadn’t sailed as a complete team (and definitely not on an RS21) this seemed an ideal opportunity for us. We booked our 4pm slot and planned to meet in Cardiff, travelling from different points across the south of England to get an evening sail in.

Unfortunately, the weekend got off to a rough start. Two flat tyres on Hannah’s car and a three-hour queue for the Nickalls brothers meant that Jack Wardell was the only one in Cardiff at the time we’d all agreed to be there… not an ideal start.

In the famous words of Jack Wardell, ‘It was a warm summer’s eve’ by the time the brothers finally arrived, but the club let us take an RS21 out for a quick sail to discover where the control lines were. Jack did his best impression of Hannah and we got some practice spinnaker work done in the dwindling breeze and light. Hannah then arrived with a new set of tyres – we were all here and we were ready to race!

Our goals for the weekend came threefold. Firstly, we wanted to get one race win over the weekend. Our second, slightly more ambitious goal, was to finish in the top five or six out of the 13 teams competing. Finally, we wanted to ‘just enjoy it, man’. 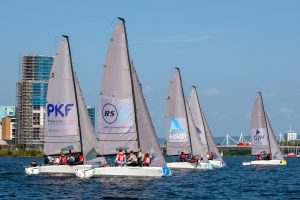 A clean start for Team Marconi.

The first day of racing started out a little better than we expected, but we were inconsistent nonetheless. Sometimes we would be fighting at the top of the fleet (we very narrowly missed out on two race wins), sometimes we would be fighting to get into the top half. From these results, we knew we would get our first win soon so our focus shifted to consistent sailing and finishing in the top five overall. 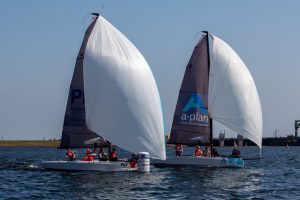 Closing out day 1 with another win!

With four races left in the day, the wind started to drop. Our improved boat handling meant we could give more attention to the racecourse. We focused on our own race, avoiding boat-on-boat conflicts when in the pack; we sailed what we knew and didn’t let the tight competition distract us. This seemed to pay off as we were thrilled to close out the day with four tightly contested first-place finishes. This left us in a close second place overall, something we wouldn’t have dreamed of going into the event.

Sunday was Dan’s birthday and nature provided a lovely 12-14 knot morning breeze as a present, forecast to drop to very little throughout the day. We carried the momentum from the evening before, two more bullets took us to six consecutive wins – giving us the overall lead! The competition was tight all day with the gap between the top three never growing to more than could be reclaimed in a single race. We sailed strongly and consistently to maintain our position heading into our final two races of the day. 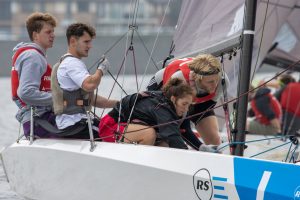 Just before stepping onto the final boat we were due to sail, we watched our closest rivals finish in sixth place… they would sit one out and then join us for our final race of the event. All we had to do to secure the overall win was get top three in our final two races, even if they beat us on the water we would take the overall win. We decided this was far too simple. We got our only penalty of the weekend in our penultimate race, possibly the worst time… Two spins at the leeward mark took us from second place to sixth, the close proximity of all the boats and the short format meant that despite closing the gap there simply wasn’t enough time to claw back any places. The gap we had watched open only 20 minutes before, had just closed up… 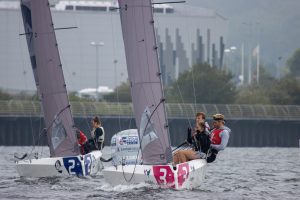 It all came down to the final race. We had done some rough calculations and knew that if we finished ahead of our closest rivals, and not too far behind third place, we would win the event. We got a good start, covered our rivals, maintained a watchful eye on the others and, in an uncharacteristically anticlimactic race, finished second. We had done it, something we didn’t consider prior to the event… we had won the regatta! No matter how well the other teams did in their final races they couldn’t improve their average enough. Not a bad birthday present for Dan. We celebrated with some (loudly announced) ‘BIRTHDAY’ bubbly and cake from the local Morrisons – obtained by Jack whilst he was ‘just getting something from my car’.

We’ve only gone and done it!

A quick side-note on how close the competition was: throughout the event there were three teams that could have sealed the deal, we finished on average of 4.89 points – equating to just shy of second place. The top six teams all got an average result between 2nd and 3rd, finishing within 15 points after sailing 18 races each. The individual and overall results can be found here: http://events.ksail.co.uk/2021/BKLCardiff/DisplayResultsSummary.html

Thanks to our win, we have been invited to compete at Poole in the British Keelboat League finals, so keep an eye out for news leading up to and around the 24th-26th September if you want to follow our results – we certainly aren’t expecting a repeat, but we’ll give it our all!

I would like to give a massive thanks to everyone at CBYC for making us feel so welcome, members and staff alike. The organisers, umpires, race committee, ferry boats and land team all did an excellent job and made the event extremely enjoyable for all of us.

But above all, from myself and the team, a massive thank you to all those supporting this format of racing at Marconi. It’s great fun and has given us an opportunity we wouldn’t have otherwise had.

Editors Notes: We’ve had some super reports back from others who were at the event, saying not only how impressed they were with the way that you sailed the event, but what great ambassadors you are for Marconi SC. Well done, and on behalf of the club, thank you guys.