Popular news
You are at:Home»News»Helm of the Year 2021 – the Finale!

Having been curtailed by lack of wind after only two races – part two of the Helm of the Year took place on Sunday 10th October after club racing.

As a quick recap, the winni 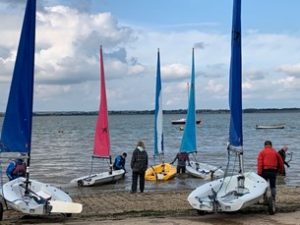 ngest helms from the Spring and Summer points racing are selected to represent their fleet in the Helm of the Year. It is raced in boats that none of the competitors normally race in (to try and even the playing field) and for a number of years now, it has been raced in Picos.

We mustered a full line up for part two with just one substitution – Pete Richardson took over as Medium Cat Fleet rep as Rob Clay was not able to make it. By Sunday afternoon, a gentle breeze had filled in along with some sunshine – making for very pleasant if unexciting conditions to race in Picos and for the spectators to watch.

Beth and Bryan Spencer were Race Officers again and Nigel James and Lee Garton volunteered for the RIB. The very strong spring tide had caused A mark – the usual outer distance mark – to drift eastwards but conveniently, this was well placed to be a mark of the course instead. Nigel and Lee then spent most of the afternoon trying to lay a temporary outer distance mark, which kept wandering because of the tide.

For race one, the 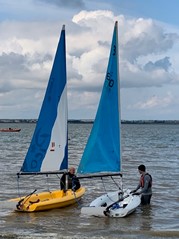 tide was still flooding and favourable for the first mark, M. Dave Russell (Monohull Fleet) found himself just over the line at the start – whilst some of the others had held back due to the tide and found themselves a little way from the line. Martin Baker (Solo) had the best start but found himself outside of Jenny Ball (Sprint 15) at M mark, closely pursued by Pete Richardson (Medium Cat). The next mark was G and the fleet had to head across towards Osea Island to get out of the worst of the tide before tacking over to lay the mark. Jenny rounded first with Pete Richardson not far behind and at the end of two laps, they held those positions – not bad given Pete had never sailed a Pico before! Meanwhile, Dave had recovered well from his start and came in fourth place, just behind Daniel Sturm (Fast Cat).

Race Two started as the tide was just on the turn. It was still favourable to start at the outer distance mark with Martin, Jenny and Daniel all vying for that end. Daniel rounded M mark first followed by Je 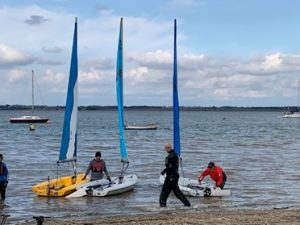 nny, Martin and Peter. Daniel began to pull away on the beat to G and had a decent lead when rounding the mark. Once on the run to A mark, however, Jenny was finally able to lift the very tightfitting dagger board to free a large lump of weed. The gap began to close and when Daniel paused briefly because he thought the race would finish at the end of lap one, Jenny was able to overtake on the way to M for the second time. Jenny went on to take the win with Daniel second and Karen Corley (Short Course Fleet) taking a very well deserved third place.

The final race started with the ebb tide in full flow and the fleet decamped down to the inner distance mark end of the line. The majority of the fleet took the diagonal line out to M mark but Daniel stayed inshore out of the tide before cutting across the tide at 90 degrees. This paid off and Daniel rounded M mark a few boat lengths ahead of the rest of the fleet – a position he held on to at G mark with Jenny in close pursuit. On the downwind leg, Jenny gybed early as the ebb tide was quickly pushing the fleet down from A mark and was able to round the ma 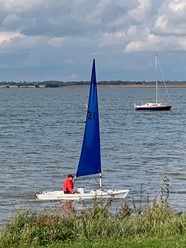 rk on the inside and pull out in front. Meanwhile, Karen and Dave were hot on Daniel’s heels. The Race Officer shortened the race at M Mark by which time Daniel had held off Dave but Karen had got through to take an excellent second place.

On the basis of the scores, the lateness of the day and everyone being hungry for Sam’s roast dinner in the galley – the fleet decided not to sail the sixth race. After the five races – Jenny was Helm of the Year, with Daniel second and Rob/Pete in third place. A big thank you to Beth for running the series with Bryan and to the RIB crews on both days. And a big thank you to the six competitors for making it such a fun event on the water!