A busy day of 12 British Keelboat League (BKL) style races were presented to the six competing teams in St Lawrence Bay last Sunday. Each team swapped boats throughout the event and with 5 SB20’s in the club fleet, there was also a short rest period for the sixth team onboard cruiser Steorra anchored on the line. Those rests were needed.

Team V were straight out of the blocks with a win in race 1 but rising to the competition team Z responded by winning the next 3 races before it was their turn to take time off. Team T then scored a win followed by team V again, and as team Z returned to the water team T also scored their second win.

The races really did come this fast. The 300 meter windward leeward course that was raced over two laps  was done in 15 minutes and with 5 minutes for boat swaps between races, it was constant concentration and trimming for the teams. The legs were just long enough to benefit from flying the kites and with two hoists and drops plus gybes within each race sail handling was fast and frantic.

By race 7 there was very little distance between all the teams and none were shy of the line as can be seen in the video below. (As armchair umpires, we’ll let you decide about team Y’s overlap call on team Z who resisted the request ‘Up, Up, Up!’ which would have caused them to be inside the inner distance mark)

The points accrued after race 7 (high points scoring) now stood as: Team T = 27. Team V = 23. Team Z = 22, but ‘T’ still had to spend their rest time ‘off racing’. Team Ong (orange, because we’d lost the lettered yellow bib) were now getting into their stride having been the first team to sit out racing, and having just scored a 3rd, place it put them just one point behind team Y. Team X had 19 points after scoring two 2nd places in the preceding races which meant they were just a win away from the team in 3rd place. 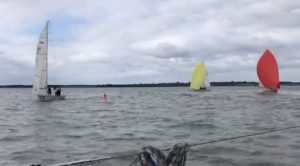 The ladies of team Y deserve a name check here (so no need for your eyes to have to check the team list at the top of this report) because of the brilliant tactical calls they made in race 10. Having assessed the changing conditions on the course, Anna Collis, Mia Morgan, and Charlotte Ferneyhough decided not to fly the kite on lap two and sailed right over the top of the other teams and straight to the finish line while the others sailed faster but longer, gybing kites to the line. With HUGE smiles and whoops of joy the ladies crossed the line, winners, whilst the rib & committee boat crews along with the resting teams celebrated with them the way in which they had out smarted everyone else on the race course. Well done ladies, truly impressive!

Race 10 really did setup the competition nicely, not that any of the sailors had a clue where they stood in the points at this stage, but team X followed home the ladies for a 2nd place just 30cm ahead of team V who in turn were just 10cm ahead of team Z in what turned out to be quite a remarkable race.

With two races still to sail before the cut off time, any one of  three teams could win the championships overall. Team T = 31. Team V = 30. Team Z = 34, and all had now spent their rest time.

Three teams had been designated as ‘Youth Teams’ prior to the start of racing and with team X = 26, it meant that team Y = 18 now needed two 2nd places or better to overhaul them to become keelboat youth champions. With team X resting for the final two races, all they could do was watch. Team Orange = 10 on the other hand, also need two wins and for team Y to score low, to jump ahead of them to gain 2nd place youths overall.

At the windward mark for the 2nd time in race 11, team X (Fia & Oli Southgate, Tom Clayton) rounded first just ahead of team T (Dave Hewes, Andy Perks, Peter Ward) and made a bad hoist that saw them trawling with their kite. Team T who now moved ahead by less than a boat length repeated the technique and with it for both teams, their chance of championship glory was gone. Team Z (Dan & David Nickalls, Hannah Bard) moved in to take yet another win to seal the Championship. Team orange (Isabella Ferneyhough, Teigan Crick, Ben McKay) did exactly what they needed to do scoring a 2nd place, but with team Y (Anna Collis, Mia Morgan, and Charlotte Ferneyhough) finishing in 3rd place, it meant that the overall positions in the Youth Championships would remain unshuffled.

The final race (12) saw Team Z underline their performance with yet another win (7 wins in total) and all that the race served to determine was which team would finish 2nd overall. As it was Team T scored another 2nd with team V in 3rd which meant that T just managed to squeeze into 2nd place by just a single point. 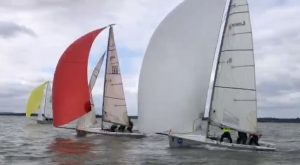 The close finish to race 10, for 2nd place

So close was the racing and the results, that none of the teams were confident of their finishing position as they attended the prize giving. What all were sure of however, was what a fantastic day they’d had on the water and everyone of them warmly commended the race officers, Debbie Grafton & Lana Jones for the splendid way that they kept the races coming thick and fast. Likewise the rib teams, that not only swiftly transferred teams as they swapped boats, but also doubled up as umpires throughout the races and shifted the windward marks as required. (Dan Bard, Adam Ferneyhough & Will, Savino Frino). And not least of all Mick Jones for providing cruiser Steorra as the hospitality boat and Andy Fowler who has worked tirelessly throughout the year as bosun, keeping the boats repaired and equipped  so that they have always been ready to sail when needed.

Just another extremely well run event by our Marconi member volunteers. Thank you all.

And so to the prize giving. Frank Burgess, who had kept a watching eye over proceedings from the committee boat, presented the prestigious Osea Cup to the very worthy winners, team Z. Dan (helm) & David Nickalls and Hannah Bard, who also received Marconi team shirts to wear as they will now go on to represent Marconi in the British Keelboat League leg in Cardiff next weekend. We wish them well, as joined by Jack Wardell in the team, and we look forward to watching those results come in.

Frank then went on to present the Youth Keelboat Championship trophy and in doing so he made a point in stating how exciting the racing had been throughout the day and just how close all six teams had been on the water. There is no doubt that amongst our younger members we have some really talented sailors and in the coming years we look forward to these sailors developing further and representing the club in the Youth events of the British Keelboat League. Well done guys, you were awesome out there!

The full scorecard can be seen below, but there is just one outstanding question:

Was there an overlap and what should have happened next?