Popular news
You are at:Home»Fleets»Catamaran»Racing to the Ends of the River

Racing to the Ends of the River

A glance at the sailing schedule or pages 12 and 13 of the Year Book will tell you that in addition to the “round the cans” racing we do on weekends – we also have a number of “one off” races each year.

Most, if not all, of these races have a long heritage and are cherished by dinghy/cat sailors as races which are “a bit different” from the norm.

Having not been able to sail them last season – it has been great to get these events back in the calendar this year.

Here is a snapshot of just two of them that have taken place recently.

I am not sure when and how this race came about – so it would be great to hear from any members who can shed further light. It is a long distance race to the Nass and back – and is unique because it heads down river. The Nass is a beacon off West Mersea beach and marks the entrance to the Mersea Quarters It is always further away than you think!

Although all competitors do the same course – there is a separate Cup for the Monohulls and a Shield for the Catamarans. Which is good because race performance between cats and monohulls can vary hugely depending on the conditions so separate trophies make more of an even race of it.

In 2021, the Pilot Cup took place on the final day of the Camping Fortnight. The bright and breezy conditions meant that everyone could get a cracking sail in and still have time pack away their caravans / tents in the afternoon.

Whatever the reason – we had a great turnout of 19 cats and 7 monohulls for the event. Following a race box start – it was a downwind leg to the Nass with a favourable tide. The monohulls and Sprint 15s plonked themselves in the middle of the channel and pointed in a straight line towards the Baffle before gybing at some point past Radio Caroline for the mark.   The two Tornados and the Nacra with their big kites shot off into the distance zig-zagging across the river but quickly out of sight of the rest of the fleet.   The six Dart 18s were also obliged to zig-zag across the river (most cats cannot sail dead downwind – its too slow – so they have to broad reach and gybe).   But had the added frustrating of meeting the Sprint 15s every time they crossed the channel, even though the Sprint 15s are somewhat slower. And all the cats were relieved to have a separate trophy as the monohulls were really not very far behind at all.

Once the Nass had been rounded to starboard, the fleet began the relatively long beat back home.   For the front and middle of the fleet, the tide was still going out so there were tactics in deciding whether to cross to the Bradwell shore or stay on the north shore. And with some sailors opting to do every option in between.   The wind also proved to be pretty variable with a definite softening for the main pack between Tollesbury and Thirslet.

The fast cats were long gone with a particularly tight race between the two Tornados, finishing within a minute of each other.   Elsewhere, the racing between the Dart 18s and Sprint 15s got interesting as a result of the variable winds.   Even once the tide had turned – heading to the south shore into the strongest tide did not seem to pay. Favourable puffs were to be found over on the Tollesbury shore seemingly offsetting any tidal disadvantage and, even when the wind filled in properly, heading to the main tidal channel off Stone put boats behind those who had headed over to the north side of the river. The Dart 18 fleet in particular inverted their positions at various points during the race to equal levels of elation and frustration.   Such is the nature of our sport.

It was a great race and after all the handicap was worked out – Jason Clarke won the Cup in a Laser and Jenny Ball won the Shield in a Sprint 15 whose tracker showed a distance of 14.8 nautical miles. (Much further for those boats that could not sail in a straight line on the way there!) 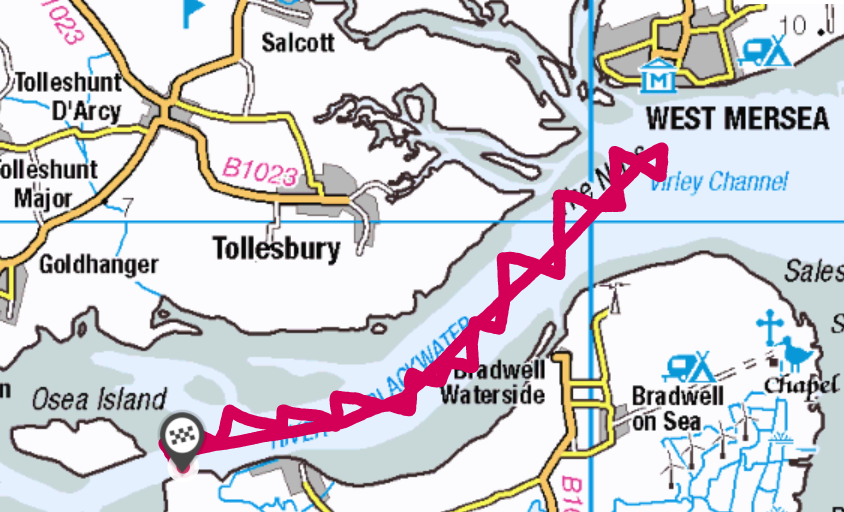 The Jackpot trophy was originally presented to the club in 1964 by Jack Bigden – a key member of the club and his family continue to be members to this day.   Appropriately enough, the Jack B, named in his honour, has been the Committee Boat for this event for many years.

There are two unique aspects to the Jackpot. Firstly, whilst anyone can join in, only helms aged 40 plus are eligible for the trophy. As a multi-generational club, many of us have clocked how old we are when realising that either we or those younger than us are now eligible for the Jackpot! Secondly, the Jackpot is basically a picnic on Mill Beach with a race there and a race back so has the added enjoyment of an adventure to foreign parts with the benefit of one of Sam’s fine galley picnic lunches.

In 2021, the Jackpot was originally scheduled for 8th August in the middle of Camping Fortnight. What could be better than some racing, a picnic lunch on a sunny beach and then back for a few celebratory drinks in the sunshine on the veranda.   Except the weather decided otherwise and presented 30mph winds and a grey and pretty chilly day. Not suited for racing let alone a picnic landing.

But having “lost” the Jackpot last year, we were determined to run it in 2021 and it was rescheduled to 22nd August. We try to ensure that the Race Management is by members who are not age-eligible for the trophy. So Dan Bard kindly stepped in as RO and Tom Clayton and Rhiannon Hitt kindly manned the Committee Boat (I think they may be the only Jack B drivers under the age of 40…..). Max Jakes and Jason Clarke manned one RIB and Gary Jackson and Wendy Allen kindly agreed to stick with their RIB duty, even though they are (only just) eligible for the race themselves.

The one bit we could not control, however, was the weather. At least this time the breeze was of reasonable and manageable strength. But the cloud cover was so low you could almost reach up and touch it. As Bill Bryson has described this type of cloud – it was likely being under a Tupperware lid.   And because it was a picnic in Britain in high summer, there were also a few rain showers floating around for good measure.

Undaunted (because we Marconi types are made of stern stuff) – 7 monohulls and 12 cats took part. It was particularly great to see so many of our more recent members come out and join in. It was brilliant that they came along for this unique race and hopefully, next year, they will be able to come back and enjoy it in more sunshine!

Following a race box start, the fleet headed off towards Maldon.   The course is relatively simple. It requires you to leave Channel Markers 2 and 3 to port and starboard respectively (ie pass between them). The next mark is No. 8 channel marker just off Blackwater Sailing Club which we leave to port and hang a left between Northey Island and the mainland as far as the pair of channel markers that mark the right turn into Maldon itself. At this point, we turn round at No.10, head back the correct side of No. 8 again (to starboard this time – are you keeping up?). We then pass between the Jack B and the shore to finish – before heading in to Mill Beach for lunch. The course on the way home is reversed.   With a start from the Jack B as Committee Boat – passing No.8 to the correct side again (to port this time – still keeping up?) before turning at No. 10 and passing No. 8, (to starboard, in case you are wondering), No. 3 and No. 2 to the correct sides before crossing the race box finish line at the club.

The added interest this year was that Blackwater Sailing Club had their Regatta Week so when the front of the Marconi fleet closed in towards Northey Island – they met firstly an armada of Fireballs with kites in full flight towards them – following by various flights of other classes making their way off the Blackwater SC start line and heading out into the main river. No major collisions occurred and the fleets managed to cross peaceably without war being declared. So that’s good.

The fleet landed at Mill Beach and took advantage of the sea grass and areas of sand to pull/carry boats up the beach without damaging them. Which is why we now land at Mill Beach and not up by the Jolly Sailor in Heybridge. I remember landing there for the Jackpot years ago – but seeing the postage stamp size of beach that exists there now – (vs concrete stone wall or deep soft mud) – I have no idea how we managed to berth our boats for a picnic! 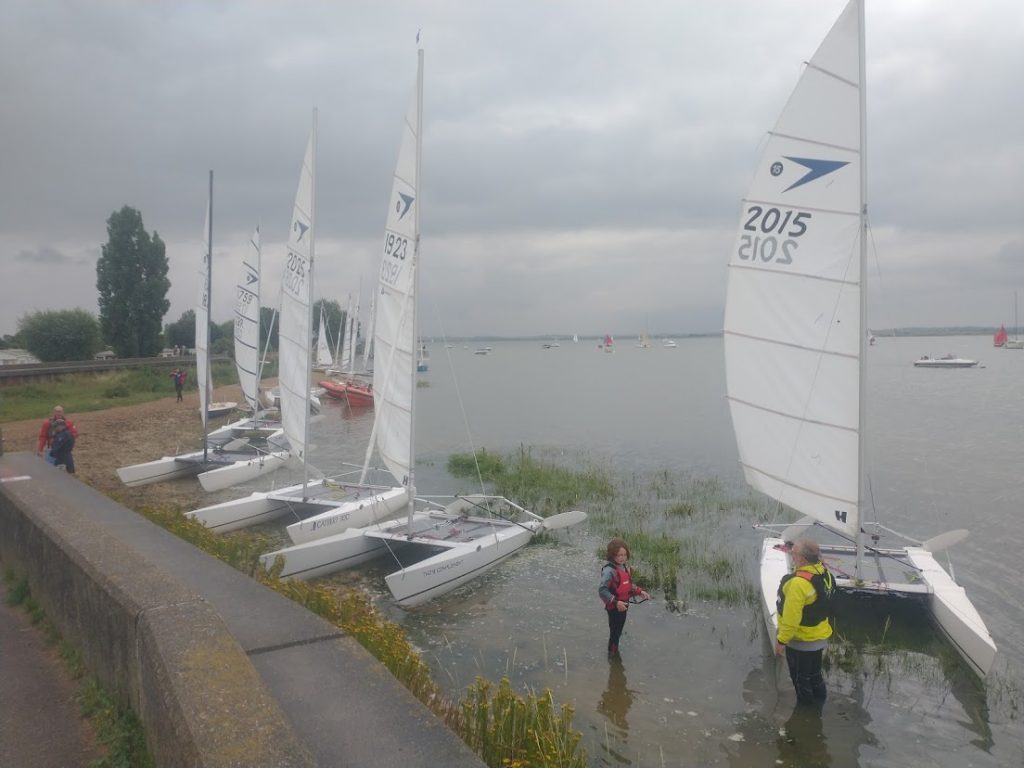 After a leisurely lunch on the beach – whilst (indoor) patrons of the Mill Beach café looked on in bemusement from their tables by the window – it was time for the race back.   Despite 20 boats clearly milling about a committee boat – some Blackwater sailors seemed surprised to find themselves sailing across our start line on port whilst we, on starboard, politely ducked them because we are nice like that.

With a decent if moderate breeze, we all completed the course in good time and were all home around an hour later. Our youngest competitor by far, John Ball (age 9), was on the winning cat home for race two (with his Jackpot eligible Dad, David) and narrowly beaten to the overall Jackpot Shield for Cats by his Jackpot eligible aunt, Jenny. An equally close fought battle in the monohulls resulted in an overall win for Jeremy and Alice Featherstone in their Wayfarer. In the meantime, John Ball went on to design a novel way of drying the spinnaker for Dave Russell’s Lark by flying it parachute style from the seawall as the weather finally brightened up a little later in the day. 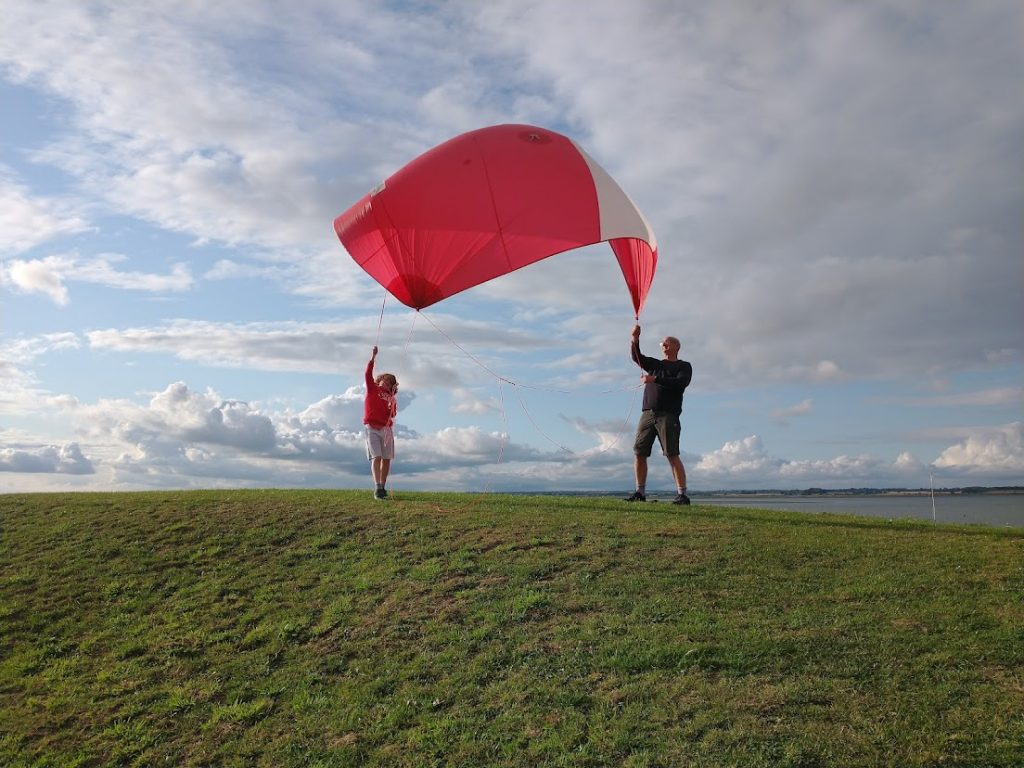 Despite the grey weather – it was a great day of sailing enjoyed by all and hopefully next year, we will manage to pick a summer weekend with some sunshine for Jackpot 2022!