The annual Marconi Cadet Regatta took place on Saturday 1st August. We adopted a slightly different format this year to enable social distancing and take into account the fact that some of our younger sailors have not had much water time this year.
So a Pursuit Race format was adopted which allowed competitors to start from the hard on staggered start times.  We also split the Regatta into two separate events.
Race 1 was for cadets who wanted to have an adult on board with them and took place in the morning.   Two Picos set off first followed by three Sprint 15s who set off in pursuit some time later. A short course off the club allowed for tight racing and was great for the spectators at the club too. The Picos did a good job in holding off the Sprint 15s but eventually, two of the Sprint 15s managed to sneak past them and go on to take the overall lead, followed by the two Picos and the third Sprint 15. Separate prizes were awarded for the two fleets. In the Sprint 15 fleet, Amelie and Ian Black took 3rd Place, Harry (age 4!) and Andrew Dowley took second place and John and David Ball came first. In the Pico fleet, Bradley and Matthew Perks came second with Thea and Mitchell Glynn in first place. 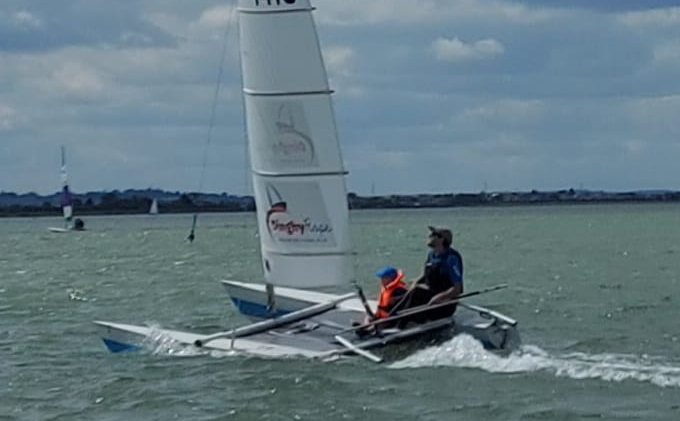 The afternoon Race was for Cadet sailing on their own. The fleet was broad ranging including Toppers, Laser 4.7, Laser Radial and a Nacra 15 so a longer course was set. The Toppers set off first, with the Laser fleet not long behind them chasing hard. Some time later, the Nacra 15 set off and the hunt was on! The kite legs enabled the Nacra to make good ground but the long beat against the tide was harder work for them whilst the monohull fleets were able to tack up the shoreline in weaker tide. The Nacra eventually caught up with the Toppers and then the hunt was on between them and the Lasers. By the end of the race, however, two Lasers had managed to hold off the Nacra 15 – although everyone agreed that another 5 minutes might have changed everything! After a fantastic race, Jason Clarke took a comfortable first place followed by Anna Collis, both in Laser Radials. Will Harrison and Isabella Ferneyhough came third in the Nacra 15 followed by Abigail Parker in a Laser 4.7 and Ben McKay, Ethan Hawkes and Alex Maloney in Toppers.
After the racing – an open air prize giving was held on the hard to congratulate all the competitors for taking part and for those who took podium places. It was fantastic to see Cadets out on the water racing again and we hope to see more of them on future Sunday races.
Report by Race Officer Jenny Ball