Popular news
You are at:Home»Fleets»Cruiser»Cruiser Racing is Back at Marconi SC

Cruiser Racing is Back at Marconi SC

Marconi SC acted as race organisers for the first race of BJRC’s 2020 Short Course Sprint series on Sunday. The weather was perfect as boats approached the Southey line from Maylandsea Bay SC, Blackwater SC, Maldon LSC as well as Marconi. 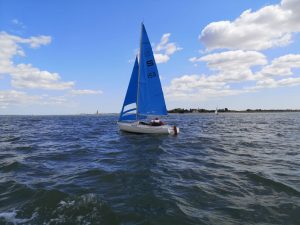 The four clubs were represented by just six starters, with the COVID-19 restrictions making it difficult for others to participate. The Marconi fleet of 5 x SB20 keelboats were amongst those missing but it was great to see the Sandhopper of Kevin Whittle (MBSC) mixing it with the bigger boats.

Race Officer Sue Carroll selected Course 201 to take the fleet in a short beat to North Doubles then off the wind to Marconi via Mayland channel mark. A decent beat back up the river in fresher conditions around HW saw the fleet successfully complete Lap 1 with Easy Rider (BSC) holding off Silver Fox (MSC) by some 3 minutes, followed by Poohsticks (BSC) ahead of Good Hope (MSC/MLSC). 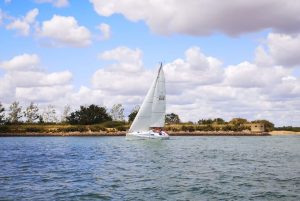 Rocket (BSC) and Wild Gull (MBSC), the two non-spinnaker participants, had dropped well back downwind but were closing back on Good Hope on the beat up through the line to Southey and Lap 2. Wild Gull, the little Sandhopper passed Rocket and Good Hope (Sadler 26) on the way back to the Mayland spit and having shown the bigger boats the way, turned to starboard to retire and head back up to Mayland as the ebb had started to flow. 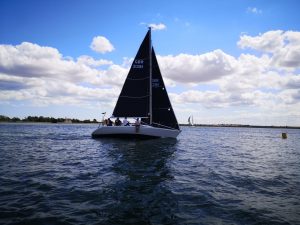 Having taken the lap 1 times at Southey, the RO’s rushed down to Marconi Buoy in JackB only to find that Silver Fox now ahead of Easi Rider (First 25.7) were approaching J mark off the Osea pillbox, hugging the beach as they worked their way against the strengthening ebb. The line was then set at Osea pier, and as if to rub salt into the wounds of the slower boats, the wind dropped away making the challenge of passing J mark for them, all the more challenging.

Rocket, with a family crew of very young sailors crossed the line with smiles on their faces, even though they had retired, having had a great day of sailing in this inaugural event.