Popular news
You are at:Home»Fleets»Cadets»Festival of Sailing – SB20 Challenge 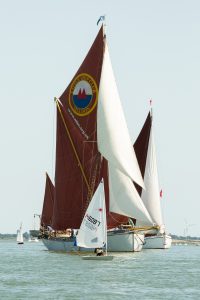 The day had started early with club members  treated to the majestic sight as the barge and smack fleet raced off their start line at Osea pier in numbers. The cruisers of the BJRC fleet followed, and soon after Marconi’s flotilla of dinghy’s, cats, and support boats went out with the tide to enjoy a picnic on Thirslet spit.

On their way back upriver in the afternoon the dinghy’s were dwarfed as they got close up to the barges with some experiencing their huge wind shadows in the light Easterlies.

Encouraged by the sea breeze, the Easterly remained into the early evening and whilst the BBQ was in full swing the Marconi members were entertained by SB20 fleet racing turning at a windward mark right under the sea wall.

With the teams being encouraged and cheered from the packed vantage points of the veranda, and the grandstand that was the sea wall, Richard Collis’ ‘Team Old Farts’, with crack SB20 campaigners on board (Geoff Parker, Simon Hipkin ) set out in an attempt to defeat ‘Team Catch Us If You Can’ (David Nickalls, Jack Wardell, Jack Collis). 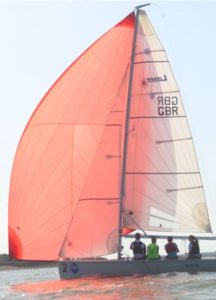 ‘Team Catch Us If You Can’, had 3 wins going into the last race and as ‘Team Young Guns’ finished 2nd in race 3 they were just 1 point behind ‘Team Old Farts’.

Everything was still to play for to seal 2nd place and then ‘Team Catch Us If You Can’ parked their boat on top of the windward mark. To much amusement of the nearby spectators, revved up by commentator Frank Burgess on the PA System, first Jack Collis tried to free the mark around the bow which left him somehow stranded, straddling the bowsprit. Next David Nickalls lowered himself off the transom to try to push the anchor line under the rudder and almost did himself a mischief as he was suspended by his shorts that had snagged on the outboard fittings.

Surely somebody must have a photo!

That left Richards team well ahead on the water, but once off the mark, and having done their turns, Davids team worked there way quickly back to finish 2nd in the final race. 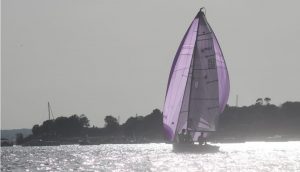 Catch us if you can. Courtesy: Dan Shenton

The Festival of Sailing was a great success and many thanks go to the large number of volunteers that made it the success it was. Far too many to name them all individually from caterers, rib support crews, winch operators, BBQ’ers, beach marshals, race officers, bar volunteers, first aiders, camping managers, covid committee, sailing committee and of course Michaela & Andy Dowley who organised the Festival. 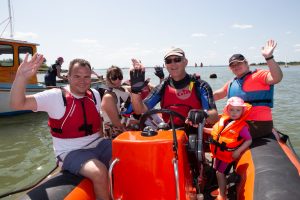