A crew of 5 Marconi members set out from Oban for a week of cruising in late June. Each crew member, having made a prediction of how many islands they’d catch in the imaginary string stretching from the stern of their Sun Odyssey 37, spent the first morning sitting in Dunstaffnage marina waiting for a weather front to pass. By early afternoon, skipper Lydia Coffey (15 Islands) made the call, and Hebridean Flame II sailed up the sound of Mull with reef one in, to spend the first night at anchor in Loch na Droma Buidhe in the lee of Oronsay. (34 miles) 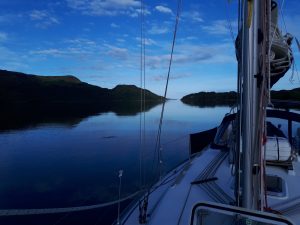 Sue Carroll (22 islands), weighed the anchor early on day 2 in an attempt to catch the last of the fading Northerly on passage to the outer Hebrides. The potential island count was now up to just two and on passing Ardnamurchan point, the most westerly point on the island of Great Britain, the question was raised. What size does an offshore rock need to be, in order for it to become classified as an Island?

Just two tacks took the Marconi sailors across to Barra (66 miles) staying north of Coll and across the Sea of the Hebrides while Karen Corley (28 islands) called up numerous dolphin pods to play in the bow wave. ‘Why do they always duck back under the waves just before the camera shutter snaps?’ 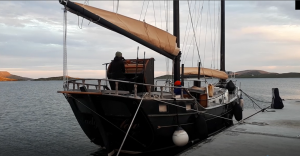 Tied up to the community pontoon in Castle Bay, the Marconi crew were entertained by a young French musician playing a session from her upright piano mounted on the stern deck of her vessel while the passengers from a tall ship sharing the pontoon looked on.

Berthing fees deposited in the honesty box, the sailors set out to explore the white beaches of Vatersay, and on taking the dinghy ashore o 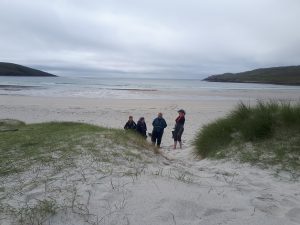 ur long distance walker Jane Allison (34 islands) set the pace as they commenced the Vatersay ‘coast to coast’ footpath. Just 500 metres later, waves lapping around their knees, there was nothing further West until Newfoundland and the coast to coast had been done.

The potential Island count now stood at just 4, so Hebridean Flame II which belongs to the members of the Go Sailing Association, was motored North through the archipelago to find a suitable anchorage for the night. (22 Miles) ‘Surely some of those rocks are Islands’ came the cry from crew member Peter Ward (33 islands) but even with support from Karen and Jane, also looking for a high count, Lydia was having none of it. ‘Just because it’s green on the chart, does NOT make it an island!’ came the reply. It therefore increased by just 1. 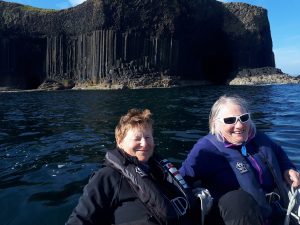 Another night at anchor in North Bay on Barra, which looks and feels very much like a Norwegian safe haven, saw our crew depart early with a forecast of zero wind as they set course to pass between Coll & Tiree on their way back towards Mull. It was a long motor sail, but it did mean that the conditions were perfect to take a tender ride deep into Fingals cave before anchoring in a freshening breeze in Loch na Lathaich on the North of the Ross of Mull. (67 Miles)

Colin the Caterpillar joined our crew for dinner to celebrate Karen’s birthday, and the potential island count had now jumped to 13 as it looked certain that we’d return to Oban by passing south of Mull. The following morning in a North 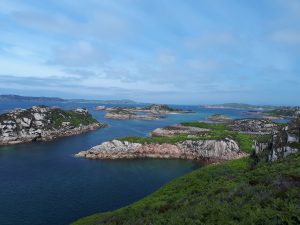 Looking towards Iona from Tinkers Hole

Westerly our crew passed through the Sound of Iona and anchored alone for lunch in Tinkers Hole before stepping ashore for just the third time in the cruise to climb a hill on Erraid to enjoy the vista.

Sadly, Colin was gone by the time our crew were flying the kite towards the entrance to Loch Spelve, but they didn’t care, mussels were next on the agenda. Blinded by the lowering sun, they navigated to miss the Mushroom on the well documented transit into the loch, but where was the starboard hand post marking that equally dangerous rock in the entrance? Nowhere to be seen! 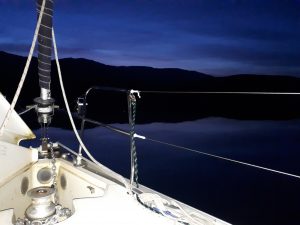 Safely anchored, Jane and Peter made a dash ashore in the tender to grab a couple of bags of mussels. Time ashore was no more than it took to stuff the money in the honesty box before rushing back to the boat, hotly pursued by the most vicious and only wee beasties (midges) we’d seen on the whole trip. (46 Miles)

On leaving the Loch the following morning and after consulting all available pilot books, charts and even an online photo library, our crew still couldn’t understand why they hadn’t seen the starboard hand marker pole on the way in. Surprisingly though new information was added, not from the pilot books or charts, but from a photo found on Wikipedia of all places, apparently there was a circle and cross painted on rocks on the shore that aligned with the starboard marker. Doubting the reliability of this new information, simply because it wasn’t in the pilot book that is the authority in these parts, our crew set off to exit the Loch and back to Dunstaffnage.

Sure enough the circle and cross were present, but not the starboard marker they were intended to align with, instead the tiniest of orange fishermans floats was in position. Clearly the post was no more, and time to update those charts onboard for others that followed us.

The island count was now 14, and just one short of her prediction, skipper Lydia turned down the opportunity to capture Kerrara in her net as we passed Oban on our way back to the marina. (17 Miles)

What a week. Brilliant weather, fantastic photo opportunities, a well found boat (thanks GSA) and a great crew of Marconi sailors. It might have come a year later than we had planned, but it was well worth the wait. Thanks for organising it Lydia. Shall we do it again next season, if we do then if it’s green on the chart I’m counting it as an island! (Peter 33 islands) 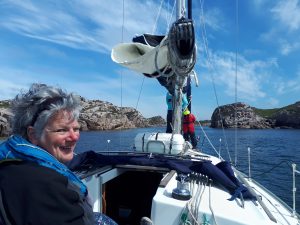 We’ll get in here easy!