Popular news
You are at:Home»Fleets»Dinghy Cruising»Wayfarer Cruisers Trip with a Difference

Wayfarer Cruisers Trip with a Difference

Here follows a brief account of our trip. Explorer is a Contessa 32 owned by Kessingland Sea Sailing Club, she dates back to the early 70’s and was first put into service by the British Army as a training vessel for our armed forces, it is reputed that she has a fastnet race in her history.

Much time and sea miles have passed and nowadays she is for hire on a daily basis from KSSC (Subject to conditions). Our Colin Wardell is a registered skipper with KSSC an as such arranged a two day mini sail from her summer base at Suffolk yacht harbour at Levington. 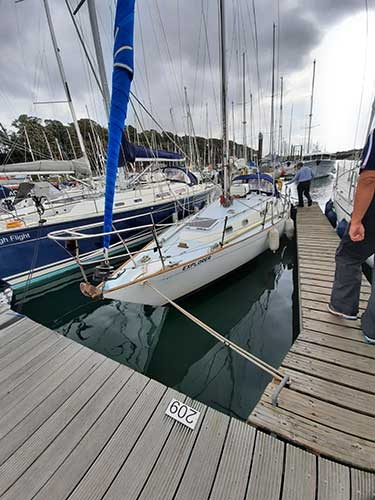 The forecast was rather gloomy for today, which was a slight disappointment as the preceding days that week had been bathed in glorious sunshine.

Nonetheless we set off by car to Levington under a blackened sky. We loaded our sailing gear onto Explorer and had tea and bacon sandwiches followed by a briefing from Colin. To our luck the weather had decided to cheer itself up and out came the sun. Observing the forecast and tide, we had decided to sail to the Walton backwaters for lunch and return to Levington around High water early in the evening. We had a lovely sail under fabulous late summer sunshine, stopping for lunch at Bramble creek.

Before long big black clouds loomed over  and a heavy squall blew through, not to worry as below decks and were enjoying tea and cake at the time.

The weather front passed in half an hour or so, we weighed anchor and set of on a reach back to Harwich and beyond to Levington. We packed Explorer away for the day and just as we tied the last knot in the sail cover the rain started gently again. Colin and Jeremy elected to stay aboard for the night myself and Jeremy Richardson returned home by car.

Heavy rain fell in the morning and the breeze built making the possibility of a sail doubtful. However not to worry as soon as we arrived the clouds lifted and sunshine was abundant.

Following breakfast of bacon and eggs we set of for a sail from SYH down the Orwell and up the river Stour passing Shotley gate the plan was to sail as far as we liked but leaving time for a return to Ha’penny pier for yet more tea and cake.

We tied up on the outer mooring of the Pier and headed for the cafe for tea and cake with the sunshine again on our side.

We set sail once more for SYH back up the Orwell whilst the sky darkened, holding off long enough for our safe return, even allowing a dry pack up.

The sun certainly shined on the righteous!

Many thanks to our skipper Colin Wardell, first mate Jeremy Richardson, chief cook Jeremy Featherstone, for great company on our midweek adventure.