Popular news
You are at:Home»News»Waterside Ramblings In the Wake of Barges

Waterside Ramblings In the Wake of Barges

We were very fortunate this year to be able to go ahead with our Camping Fortnight at Marconi Sailing Club. The shore side arrangements were different in order to maintain Covid safety and we were not able to run our Cadet week – but those of us who were able to camp or travel down during the week made the most of the opportunity to get on the water whenever the winds permitted.

The Sprint 15 fleet had already completed quite a few local cruises around Osea and Northey Islands or up to the Baffle or Radio Caroline and back. During Camping Fortnight a few of us also did some longer cruises up to Pyefleet and also to Wivenhoe.

Originally, the Pyefleet cruise was supposed to be a visit to Tollesbury but Fleet Commodore Nigel and Able Seaman Richard (in a Dart 16) went rogue when they got to the entrance to Tollesbury Fleet and shot off to West Mersea beach instead. Meanwhile myself and Cabin Boy Dan (first time sailing a Sprint 15 that day) had loitered around the entrance to Tollesbury waiting for them, before they decided to tell us via VHF that “we” had had a change of plan. I may have complained a few times.

Fleet Commodore Nigel felt sorry I had not got the trip to Tollesbury as planned, so we made arrangements to go on the final Saturday of Camping Fortnight. I know the Tollesbury and Salcott area reasonably well from seawall walks in the area so I was looking forward to visiting afloat. We decided to incorporate Salcott Creek as well – because its there – and then drop back into Tollesbury Fleet on the way home if time and tide allowed.

As with much of our river, and indeed, the Essex and Kent coasts generally – this is very much Thames Sailing Barge territory. The creeks hereabouts were regular haunts for Thames Sailing Barges delivering and collecting cargo from local farms to take to London or other markets. The creeks are narrower now than they once were and it can sometimes be very hard to imagine how something as wide as a barge navigated them – but somehow that makes it all the more magical.

Now, I appreciate that there are not many similarities between a Sprint 15 Catamaran and a Thames Sailing Barge. A Sprint 15 is much smaller, made of plastic, has two hulls, does not have red sails, is usually sailed single handed and is not much use for carrying 250 bales of hay. But we are shallow draft vessels and don’t have a boom so that was close enough reason for us to follow in their footsteps.

Salcott-cum-Virley sits at the top of Salcott creek and is historically two separate villages. Virley and Virley Hall were once prominent although the only indication now is that the entrance into Mersea Quarters is named after it. Its church is derelict following the Colchester earthquake in 1884. (Yes, Colchester did have an earthquake, feel free to fact check me). Neighbouring Salcott still retains its church but has sadly lost the various pubs that used to be supported by the local area and visitors by water.

Fleet Commodore Nigel and I set off in a decent breeze on a lovely sunny Saturday towards West Mersea. The River Blackwater was busy and on reaching the entrance to the Mersea Quarters, there were plenty of vessels heading in and out of West Mersea itself. However, we were taking the left hand Salcott channel away from West Mersea and once we had passed the line of moorings, we miraculously had the whole open water to ourselves. We had the wind behind us so it was a lovely sail straight up the middle of the channel. Copt Hall Creek branched off to the right which, not surprisingly, winds its way up to Copt Hall but probably better for exploration by kayak or SUP.

Sailing in Salcott Creek – all to ourselves

We continued past Quince’s Corner, startled a lone fisherman and saw a sign, accurately as it turns out, warning us to slow down because there were swimmers. The channel narrowed quite considerably – we rounded the corner and there were indeed swimmers who also seemed startled to see boats. We could see from our chart (OK, my Ordnance Survey App), that the channel opened up a little here but then got very narrow again for the final stretch up to Salcott itself. Two key things matter when you are creek sailing. Firstly, you need to turn round before you run out of room to physically turn round. Secondly, you need to remember that if you have a nice easy run in, you will need to beat back out and that also requires a channel of sufficient width to do so. Particularly, if you are in a fifteen foot catamaran that does not have centreboards to help with close quarters tacking. 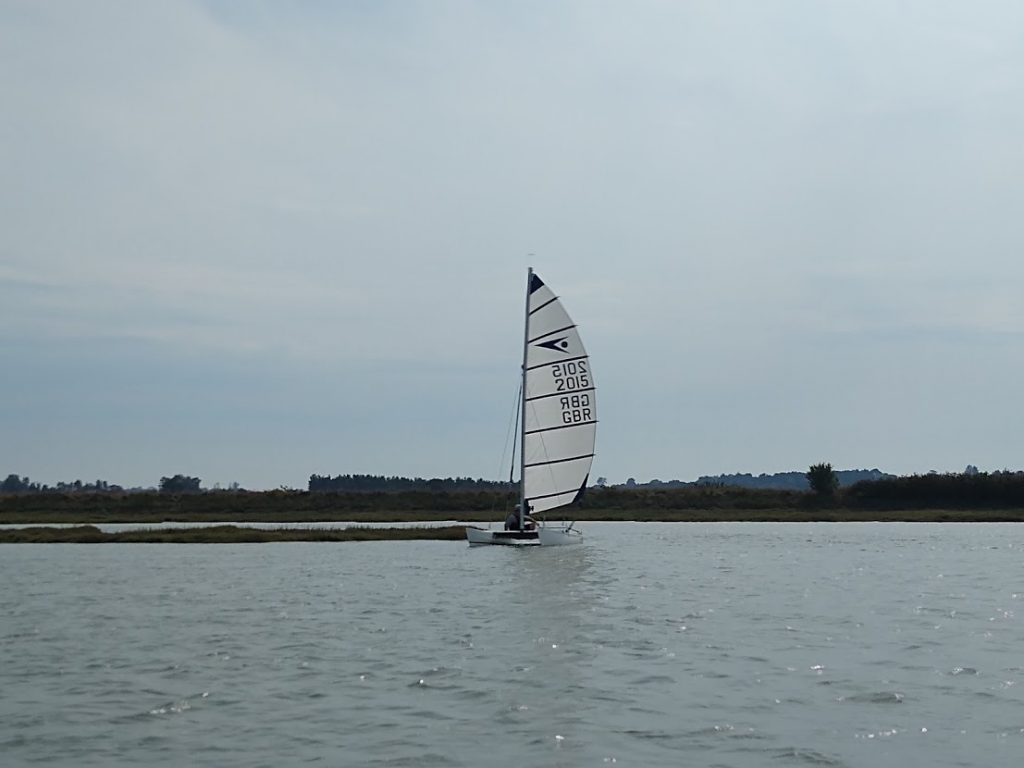 So we decided to turn round at this point as the onward channel was very narrow indeed. Plus, as there aren’t any pubs in Salcott any more, the incentive to get stuck trying to visit was reduced. But I knew that Sailing Barges used to trade all the way up to Salcott so once back home, I did a bit of research and found this lovely picture of SB Lord Warden unloading flints and taking on a cargo of hay c 1920 (Source: Mersea Museum website). Even in this picture and when the creek was wider than today, the channel looks very narrow for a barge, let alone being able to turn one round. But if a barge can get up there, a Sprint 15 can – so the Fleet Commodore and I will be going back to complete this particular voyage properly. 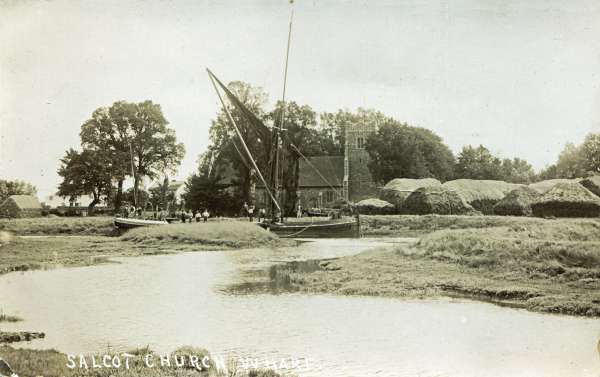 We tacked our way back past the lone fisherman. This time, it was our turn to be startled as two large professional looking RIBs came up the channel – not at speed exactly – but faster than felt appropriate for this lovely quiet creek. The swimmers were destined to get their second surprise of the day. The channel widened again making the beat out very enjoyable. As we turned past the entrance to Copt Hall Creek, a small clinker wooden yacht was anchored up and clearly planning to stay the night. I felt very jealous and tried to mentally engineer how to rig up a boom up tent on a Sprint 15 (which does not have a boom) so we could stay overnight somewhere like this. We tacked back through the moorings and Fleet Commodore Nigel took one of his random detours that I am now getting used to – this time around the back of Sunken Island. We re-grouped at the end of the moorings and then turned right towards Tollesbury Fleet.

We took the right hand North Channel because there was a creek that I particularly wanted to visit by water. Old Hall Creek leads up to Old Hall Farm, not surprisingly. To starboard were the Old Hall Marshes (yes, there is a theme here) which is now a nature reserve managed by the RSPB. The Marshes are a large peninsular between Tollesbury and Mersea Island and highly recommended for a lovely sea wall walk. Rather wonderfully, you can park up and take a long walk around the whole of the peninsular – at which point you can walk for about ten minutes across the neck of the peninsular and return to your car. It is the ultimate in circular walks.

The tide was still on the flood so although the channel was pretty narrow, we knew we had water to carry us in and back out again if necessary. It is a lovely winding channel through the salt marshes and we had the whole creek to ourselves as any other craft were back down in Tollesbury itself. Towards the head of the creek is a fine building that used to be the Ship Ahoy pub – also previously known as the Crooked Billet. The building itself is 17th century and it operated as a pub until 1917 despite being some distance from anywhere.

It served a busy trade of Sailing Barges that landed and collected various cargoes at the quay in front of the building. There was also a brick works adjacent to the quay and cargo was also loaded onto the “Crab and Winkle” railway line that ran from Tollesbury to Kelvedon and passed by the end of the lane. It is a lovely building and every time I have walked this way, I have always been deeply sorry that you can no longer get a pint and sit and look at the view. The quayside itself had been derelict for many years but was being restored this summer and there are also self catering cottages in this lovely spot.

We turned round in front of the quay and headed back out through the winding creek. There are several creeks to explore in the Tollesbury Fleet but as the tide was on the turn we thought there was time for one more and decided to sail up Woodrolfe Creek which takes you to the waterside of Tollesbury itself. Woodrolfe Creek is relatively short and you quickly reach the section with moorings along the bank and the lightvessel home of Fellowship Afloat who give young people the opportunity to go sailing.

On a lovely August afternoon, the banks had lots of people enjoying picnics and BBQs and a group of youngsters were entertaining themselves by jumping into the water from the entrance gates to the marina. I could not help thinking it would have been better and safer if they had been on the water in a boat instead. Whilst the Tollesbury foreshore has arguably changed more over time than its counterpart at Salcott, this creek was also a regular haunt of Sailing Barges and here is another wonderful picture of SB Lord Warden moored up here in the early 1920s. 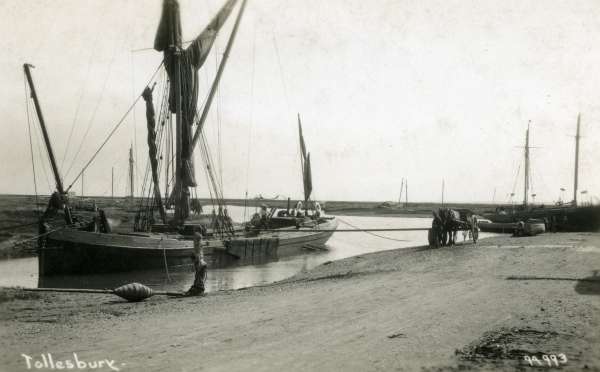 I suggested to the Fleet Commodore that sailing into the marina might not be a good idea, not least to avoid being divebombed – so we turned round and headed out again with the tide under us. At the end of the creek, we turned to starboard and beat our way out of the South Channel in a nice stiff breeze before heading for home.

We followed the north shore of the River Blackwater to avoid the strongest part of the tide and sailed past the remains of the pier that use to stretch out into the river at the far end of the Crab and Winkle line. Having reached the eastern end of Osea Island, we sailed the last stretch across the channel back to the club – very happy to have bagged three fascinating creeks on a lovely afternoon sail.

Thank you to Jenny Ball for providing this write up.