7 teams of Marconi sailors were supported by 7 other members acting as race officers, umpires and rib transfer crew on 9th July. In total 26 members had a fantastic day of windward leeward, short course racing in the clubs fleet of SB20’s in St Lawrence bay.

Teams of sailors from across the club with differing levels of experience gained from dinghy, skiff, catamaran and offshore cruiser racing, set out to become 2022 champions and in the process, aimed to give stiff competition to the Marconi Ladies & Youth Teams, who are set to represent the club in the British Keelboat League later this year, thanks to our private and corporate sponsors.

Right from the off it was clear that it was going to be competitive as boats fought for their positions on the line in race one. Our younger and well drilled team of Jack Collis and David Nickalls were going to be difficult to beat as they demonstrated some slick kite handling around the course, whilst cruiser racers Ian Ivermee and Lana Jones joined by Iain Saunders chose to white sail and made significant gains whilst others struggled to tame their kites. 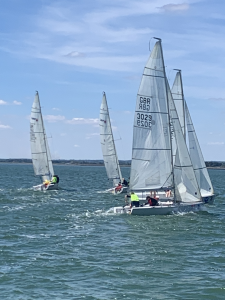 With 7 teams and 5 boats, Dan Bard did an excellent job of swiftly swapping crews across boats throughout the day and there was very little delay between the two lap races which lasted between 15 & 20 minutes each. Whist the very efficient race officer team of Debbie Grafton and Sue Carroll got racers swiftly into their prep signal, those not racing were taking on water in an attempt to stay hydrated on what was a very hot day.

Transatlantic racers Dave Onyons and Mick Jones, joined by Savino Frino got an absolute flyer starting on port at the pin end on one start proving the need for others to pay attention to the shifts throughout the afternoon.

The umpires of Anita Baynham and Bryan Spencer, who swiftly took action in race one penalising team Martin Keswick, Peter Ward & Paula Maas, proved very decisive and quite a few teams were seen to be doing penalty turns during the day, which just made the racing even more competitive.

Unfortunately team Richard Collis, Kyle Tibbs and Pat Healy had to retire their boat half way through the series and limped back to Marconi whilst the remaining sailors shifted the course to accommodate the 100 degree shift.

At the prizegiving, the exhausted sailors awaited the results which were calculated on average points scored per race for each of the teams.

The clever white sailing and use of the tide served the team well that finished in third place and congratulations are very much in order for team Ian Ivermee, Lana Jones and Iain Saunders.

Two teams tied on points, each scoring 4.4 points per race, and as both teams had youths onboard, one was going to be crowned youth champions, whilst the other would be awarded the Osea Cup as the Keelboat Champions for 2022. 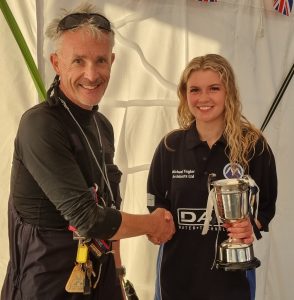 Separated only by the number of race wins, the 2022 Marconi Keelboat Champions are, Isabella Ferneyhough and Tristan Walker Hutt, whilst the Youth Championship trophy was awarded by Commodore Bryan Spencer to Jack Collis and David Nickalls.

Well done everyone especially to Trevor Holder who assisted with boat launch and recovery and Pauline Savage who acted as race officer assistant and photographer at short notice.