The weekend of the 17th and 18th August marked the second running of the Junior Catamaran championships hosted again in association with UKCRA (UK Catamaran Racing Association) by Marconi sailing club in association with UKCRA (UK Catamaran Racing Association). This year saw 8 teams with ages ranging from 9 to 16 taking part in a hotly contended regatta all sailed in UKCRA owned and borrowed Dart 16 catamarans. Many of the teams this year determined to show the Multihull sailing skills have spent much of the summer brushing up on the extra skills needed compared to sailing a dinghy.

Following the Saturday briefing where teams were allocated boats for the day. They were then faced with a forecast which saw the wind increasing throughout the afternoon from a pleasant force 15 to 20 knots, to a challenging 20 to 30 knots.

The teams ranged from competent club sailors who have done some multihull sailing to top class Topper squad sailors who have done very little multihull sailing. Race 1 started with a pleasant 15 knots of breeze, but by the first windward mark it was possible to see the larger gusts pushing their way across the race course. David Nickalls and Ben Cross took an early lead and held this the whole way round, several other team got to grips with perfecting the technique of right a capsized Dart 16 and how to hand those challenging mark rounding’s.

The race team quickly got Race 2 underway as the wind was building there were several more capsizes across the fleet, this time the two all-girl teams of Emma Crane, Abbie Wallace and Sophie Savill and Hannah Bard put in a great performance, but team Nickalls / Cross remained untouchable.

With two races under their belt and the wind still increasing, the race team decided to cancel racing for the rest of the day, with the promised forecast for Sunday looking perfect. 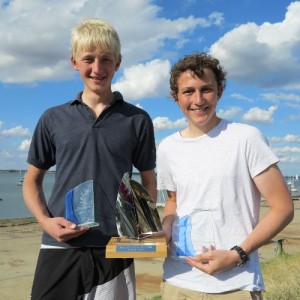 Sunday dawned, near with near perfect champagne sailing conditions. The race team were quick to get the teams out sailing again swapping the boats around to ensure fairness and were able to complete 3 races in the morning and 2 in the afternoon. Emma Crane and Abbie Wallace quickly showing what she had learnt from the previous day with a very respectable second in race 3. Throughout the day there was some very close racing and all teams and positions changed dramatically right up to the finish lines with several occasions the leaders being pipped over the line, simply by missing a crucial tack in the strong tide.

With the fight for 2nd and 3rd place coming down to the last race, Jack Collis and Becki Chapman only lost out to Daniel Nickalls and William Harrison as Becki lost her footing and was found swimming in the Blackwater, only losing a couple of places, but it was enough to knock them back down to 3rd on count back.

At the prize giving a new perpetual award was presented, the “Dewhirst Award” This was presented in memory of Nick Dewhirst the UKCRA Chainman who sadly passed away in July. Nick’s tireless work ensuring that catamaran sailing received the recognition it deserved among the wider sailing community, including the battle to reinstate a Multihull in the Olympics will be remembered for years to come. The boats made available by UKCRA for the event were again only available due to Nick’s constant campaigning for the support at grass roots level of the sport to ensure that our up and coming junior sailors have the opportunity to try out the exciting world of catamaran sailing.