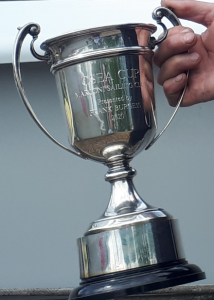 Marconi Sailing Club gratefully accepted the impressive Osea Cup this week from Frank Burgess, a member of over 26 years.

At the official hand over ceremony, Frank, who started sailing at Thamesmead in S.E. London in 1974 on a Fleetwind before moving to Erith Yacht club to sail and race cruisers, recalled the many impressive and historical silver trophies that he’d come across in his many years of sailing.

Listen to the interview, kindly recorded by Dan Shenton, of Frank as he hands over the Osea Cup to the club. We know that Franks name is engraved on some of those trophies that he mentions winning in his typically understated way!

Frank moved to sail at the Hoo Ness YC on the Medway and served as Rear Commodore and for a number years he was responsible for organising the ‘Hoo Freezer’  before taking up the reins as Commodore.

Whilst at Marconi SC, Frank has held a number of official and unofficial positions promoting sail racing and youth development and epitomises the culture of volunteering that makes our club such a great success.

As a club we’re honoured to accept the prestigious Osea Cup, which will be raced for in an annual sail racing event organised by the club. Winning this cup will be a much prized achievement.

Thank you Frank. On behalf of all the Marconi members.