Popular news
You are at:Home»Fleets»Keelboat»Marconi Keelboat Team on Southampton Water

It was a very, very, early start from Essex on Saturday as our Ladies Keelboat Team headed to the Royal Southern Yacht club to take part in the British Keelboat League. On the journey as, sleepiness gave way to excitement, our team who hadn’t fully sailed together before, used the trip to Southampton to plan their roles within the boat.

As soon as they arrived they found that they had been scheduled to race in race one, which meant that they would have a short familiarisation period as they sailed the RS21 keelboat out of the River Hamble into Southampton Water where the course was to be laid.

Team Captain Fia Southgate said, “Once we arrived, we got to practice moving in synchrony rocking the boat out to the race course in the light airs.”

10 teams would compete against each other using a fleet of 5 keelboats, all taking time off as teams were rotated so that every team sailed on every boat. As soon as racing started, it was clear that there were a mix of well drilled teams such as the Royal Northern & Clyde YC, who started their campaign with two wins and others like Marconi, newly formed who would take a little while to get up to speed.

Fia continues, “We initially struggled with speed upwind and carrying speed through manoeuvres, but with some pointers and reflecting as a team we were soon roll tacking smoothly and our upwind speed was improving.”

Our Ladies scored consistently in 4th & 5th places but the gaps between the fleet were reducing and in race 14, Marconis last race of day one, they finished the day full of encouragement having scored a 2nd place.

The team reflected on their day 1 experience at the ‘Frocks & Flip Flop’ dinner as they got to know the Ladies from the other teams who’d travelled from across the country to participate. (read below for Day 2)

Many thanks to our sponsors who enabled our teams to compete in this event.

Mia Morgan and Anna Collis started the day determined to perfect their kite hoists and drops. Communication is key in a keelboat team, and Anna was determined to make sure this happened shouting (politely) to Mia over and over again to ‘Let the Tack line off. Let the Tack line OFF!’ as they tried to drop the kite at a very busy mark rounding, only to later realise that Anna was actually stood on the cleat preventing the release!

Our team were becoming more competitive as day 2 progressed, and they were having quite a few laughs at the same time. Whether it was the affect of the heat from the sun, or a spillage of sun lotion on the decks of the boat we’ll never know, but Anna took an almighty slip and came crashing down fully on top of Mia, both of them rolling around in the bottom of the boat while Fia and Jemma looked on in amazement. Nobody was hurt and Fia soon got the unruly foredeck team back into serious racing mode.

Fia continues, “On day 2 we were hot on the heels of the fleet at the leeward mark and after watching their strategies for windward spinnaker drop we attempted it for the first time and totally nailed it! We were able to use this strategy for the rest of the day and it worked really well for us. Throughout the whole weekend the communication on the boat was getting better and better as we got used to working together, and it certainly showed in our results over the weekend.”

Our team were close on points throughout day 2 with the two teams from Poole and one from Eastbourne. Even though Marconi scored three second places on the last day it just wasn’t enough to catch the Poole teams, all of which had now sailed 15 races. Marconi finished the series in 9th place, whilst the Royal Northern & Clyde, and Scorpion (mixed club team) both finished on top with equal points, the former winning on countback. The full results can be found here.

As they journeyed home at the end of the weekend, Jemma Clarke summed up her first experience of Keelboat racing by saying, “The event was a great learning experience and I found the short format racing really exciting. I really enjoyed it.”

Well done ladies, we look forward to you bringing back your experience to share with us all on our next club Keelboat training event. 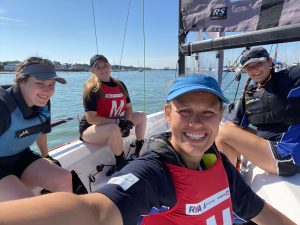