Popular news
You are at:Home»Fleets»Cruiser»Ionian Odyssey 2016

Posted by Cheryl Cutmore
Holiday booked through Sailing Holidays that provided us with a very useful and comprehensive marina guide including excellent photographs of the majority of the marinas in the whole region. 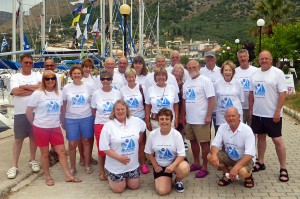 An enormous thanks to Jackie and Roger Camp for organising the most exceptional Summer Cruise. What an amazing fortnight. The scenery, the sailing, the weather, the food, the drink, the company. And of course an extra large portion of laughter. I can’t think of any way of improving it. Here is my diary style record of our two week holiday in Greece, starting in the Northern Ionian sailing to the Southern Ionian and back stopping at many wonderful places along the way.
The Fleet 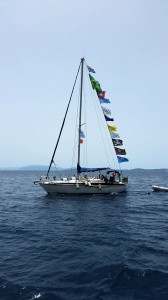 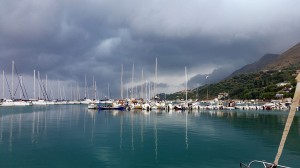 Plataria Our first taste of the Ionian. A beautiful bay skirted by mountains with a lovely shingle beach with restaurants spilling out onto it. We enjoyed our first meal at Olga’s on the marina. One of the local cats decided to pee through the pergola roof onto Jan causing much mirth and an interesting aroma. It was great to all be together if the restaurant had a problem with dealing with the volume of dinners ordered. We stayed another day in Plataria due to strong winds and rain in the morning. We gathered for a quiz after lunch then went out for a sail round the bay in the afternoon. We had a lovely dinner on the beach. It was quite difficult sitting on chairs on the shingle beach and there was a dominos effect moment when Mike Cutmore toppled over and he and Cheryl tipped off their chairs. Was the wine to blame?! A great place to watch the sun go down and see the stunning sunset. 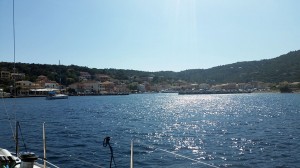 Gaios Fabulous sail over. Gaios has lots of restaurants which early in the evening started to release the ever tempting smell of bbqed meat and many different shops selling a wide variety of goods. Somewhere that might be worth staying for another day. We had dinner at Genesis overlooking the the bay. Enormously pretty. All sorts of different craft moored against the long winding harbour wall with a pretty little beach tucked round the corner that was ideal for a cooling swim. 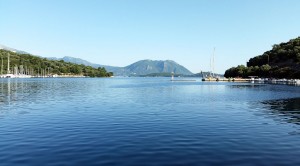 Spartatahori Early start and big swell to Lefkas Canal where we were able to stop for lunch moored against the quayside before going through the canal and on to Spartatahori, Meganisi, Steve and Gerry’s Quay. – totally beautiful spot. Dinners were usually dip style starters, grilled cheese or stuffed vegetables. Fresh fish, squid and mussles could be had as well as popular favourites such as mousaka, kebabs and spicy meat balls. Spartahori was surrounded by stunning pine covered hills. We swam off the boat after mooring up and all got together for a joint meal. Walk up to cliff top in the morning before leaving to see view of the whole Ionian. Really beautiful (but isn’t it all!) 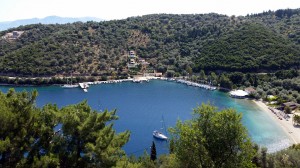 Kalamos Georges restaurant – dinner on the beach with stunning backdrop of the distant misty mountains. Great sail down alongside Richard and Margaret. Did not find the bay with the church that was recommended for lunch stop. Lunch for us was usually local produce such as Feta cheese, olives, enormous fresh ripe sweet tomatoes , stuffed vine leaves with crusty freshly baked bread dipped in olive oil. A naked girl on the beach rather startled Richard when he swam ashore. He believes she may have had an accident with the strimmer. We swam off the boat and snorkelled round rocks. Later we all met in the local cocktail bar for pre dinner drinks. 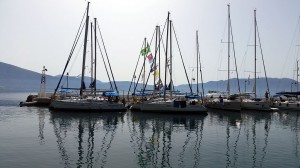 Vathi On our way to Big Vathi on Ithaka we raced to One House Bay. Had our usual lunch, snorkelled and fed fish. Woke to still flat calm and immense heat! Wide populated bay. Rafted on quay. Delish yoghurt with honey and fruit for breakfast. Some took 20 minute walk into village. It was way too hot so we made off and welcomed the cooling sea breeze. 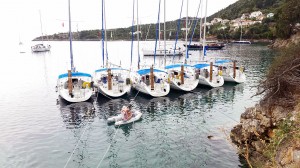 Kioni Made off early for Kioni. Lunch stop then early in to port to find good spot and avoid mooring away from the quay and using tenders. Had to moor out with stern lines which made an interesting muddle to negotiate in the tender to get on and off. Punch party on the quay. Really good dinner at Three Windmills right by the beach. Had enormous fun attempting to get back on board the boats after a wine or two. Lots of shrieks of laughter from Sue Arnold and Sue Booth finding keeping dry impossible. Lunch stop in a pretty little bay just before Frikis. Moored up and got in the water for a swim and snorkel. As we entered the bay a young woman was waving at us. To our surprise the police turned up and moved us on due to mooring too close to the beach and being a danger to swimmers. It would appear the waving young woman was telling us to go away and called the police!!! Totally mad!! We moved onto an adorable little bay that was perfect. 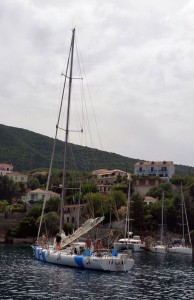 Decided to stay another day in Kioni to chill. All the fleet got spaces along the quay. Sampled the yoghurt and fruit and walnut for breakfast. A new take on delicious! All swam off the quay from steps down the rocks. Enormous racing yacht came into the bay and anchored but neglected to secure the anchor and the whole lot fell to the sea bed! Peter Clayton, in swimming at the time was asked if he could dive down for it. Naturally de didn’t! All met up for pre dinner drinks at Derek and Hillary’s boat. All had dinner at Avra. Lots of feline friends came to share with us! The wind got up and blew strongly all night. And kept blowing the following day.

Sivota was the next stop. Sailing holiday base. Lots of Tavernas and shops fringed by wooded mountains. Small beach for swimming. Could buzz over the harbour in tender. Lunch swim in bay by Frikes avoiding nutty sunbathers. 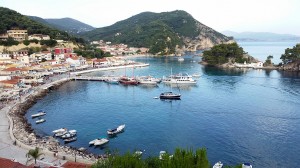 Preveza Stopped at Goat Bay for a swim. Went through Lefkas Canal 4pm opening. Wind speed had gathered. Great sail up to Preveza on foresail only. Moored on the quay. Very hot. Good town with lots of tavernas and shops. Great meal. Enormous mullet – delicious cool spot outside the restaurant and inexpensive. Busy night. Sue Arnold’s anchor was not holding and had to be relaid. Next boat to us decided to run engine at 11pm! Hot night had to spend time in the cockpit cooling off.

Parga Early start for Parga. Possible stop at Two rocks bay. The bay was stunning. We swam snorkelled and had lunch. 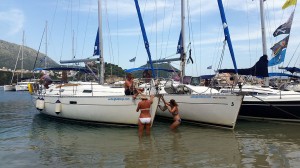 We were moored grounded on the beach at Parga and had fun on the paddle board. We caught the ferryboat into town. Large bustling town with Venetian fort on the hilltop. The majority of us went up for dinner in a restaurant by the fort with spectacular views over the bay. Bit of a challenge getting off the boats and shopping in the morning.

Stopped at Emerald Bay for lunch on the way to Mongonisi. The bay seemed deserted then we were joined by a pleasure boat overflowing with people. The bay was transformed from a tranquil paradise to the local lido! 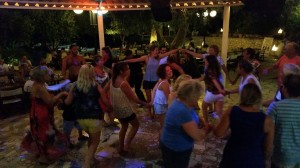 Had a great evening in Mongonisi Greek dancing which started with a demonstration given by the locals after which we were all pulled up to have a go ourself. Much to all the ladies delight the local lad performed stripped to the waste exposing a gorgeous muscular torso that it would gave been rude not to have gazed at.

Sivoter Muertos We hugged the coast of Mongonisi then took a 45 degree course to SM which enabled a sail over. There being no opportunity to stop in a bay to lunch and swim we had our lunch whilst under sail. This seemed rather decedent and definitely rather clever! 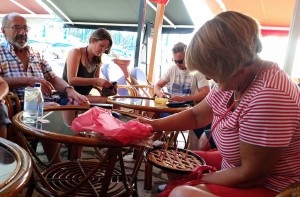 We all assembled for a briefing ashore and Jan got a tart with candles for Ellen our hostess who was 29 that day. The girls donned wacky glasses and we were given ‘viagera’ shots by the bar owner. A few jokes were exchanged.
We had dinner at George’s which was superb. A few shops to wander round and daft hats to try on.

Plataria Dropped off for a swim after a yoghurt honey and fruit breakfast. Nice little beach just before Plataria then into Plataria stern to by Olga’s. The last evening of the most amazing holiday we all got together for dinner on the beach. 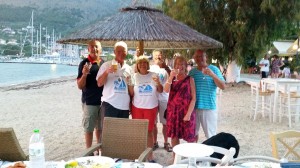 There was some concern as it had rained earlier but the skies had cleared and we decided to take a chance. Was the most perfect evening. Food was fabulous. The restaurant put out oil filled torches to light the table then we dined and watched the most wonderful display of the day turning to night and the sun slowly sinking into the sea creating the most wonderful orange glow. 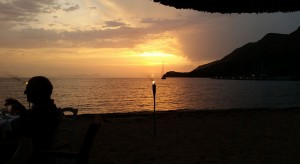 If you would like to add your photos to the MSC Cruiser Gallery please contact Pete Booth.