Marconi SC organised the final cruiser race in the BJRC Sprint series last Sunday. With a very high spring tide and a NE breeze the RO operating from club launch JackB set a course to start at the Doubles Buoys and take the fleet up towards Maldon.

It was a reaching start for the five boat fleet to Southey turning mark, and then closer on the wind to Shambles with Silver Fox (Charlie Ball MSC) leading the way. (image above) 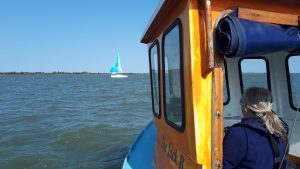 Kite hoists for all but Rocket (BSC) who chose not to use one for the series, with Easi Rider (BSC) hoisting a little too early and then fighting the wine glass out.

Kites were held beyond Hilly Pool and onto Herring Point for the drop.

The river was busy around Hilly point with dinghy racing, wayfarer cruising, kayaks, SUP’s and jetski’s all making the most of the blue sky conditions, as were the tourists filling the barges as they came out of Maldon. Unfortunately Easi Rider was forced to duck into the wind shadow of one of these barges, causing them to drop away from Silver Fox. 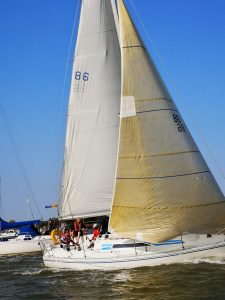 The tide was still flooding as the fleet rounded N. Doubles on a close reach to Shambles before hoisting kites back to Hilly Pool on lap two.
Silver Fox finished well ahead of the fleet however Poohstick (BSC), the event winner, was storming around the course and could be seen to be getting ever closer to Easi Rider during lap two.

The RO opted not to add another small lap, fearing the ebb, when it started, would seriously affect the finishing time of Good Hope (Trevor Holder MSC). As it was Good Hope crossed the Doubles line just before the turn of the tide, the North Easterly wind seemingly holding the water up river.

Many thanks to RO Peter Ward, assistant Sue Carroll, and to Steve Sharpe for turning the results around very quickly.